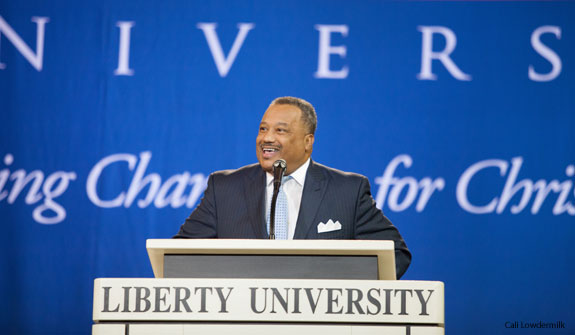 Pastor Fred Luter, Jr., president of the Southern Baptist Convention (SBC), spoke to students at Liberty University in Wednesday’s Convocation about the importance of having a renewed mind in Christ.

“I want to challenge you this morning to understand how important your role is as students of this phenomenal school and how God can use you to impact our culture in America. In order for that to happen you have to be lights in the dark world and salt in a low-sodium society,” Luter said.

A native of New Orleans, Luter has been the pastor of Franklin Avenue Baptist Church since 1986. After Hurricane Katrina hit the city in 2005, his congregation dispersed all over the country. As a result, he set up satellite campuses and continued pastoring to his members. In 2008 he returned to New Orleans and was able to open up the doors to the church in a new building.

In June 2012, Luter was elected the first African American president of the SBC.

On Wednesday, Luter delivered a passionate sermon characteristic of his New Orleans background and what some may call “old-time preaching.”

He told students that their minds are always being tempted, enticed, seduced, attacked and “punk’d” from the enemy to want to sin — regardless of marital status, position in the church, or age.

Luter gave several examples in Scripture of people who easily fell into sin because they allowed their minds to reach for the things of this world.

“How can we as believers stand and be victorious from the attacks of the enemy? You must have a renewed mind,” he said.

According to Luter, that mind should be on Christ, the cross, and your choices. He also gave examples from pop culture of people who have not considered how every choice has a consequence.

Luter closed Convocation by asking students to sing along with him a cappella the words to “At the Cross.”