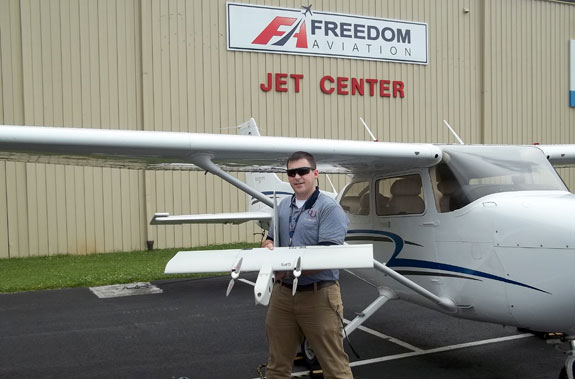 Joshua Tate ('11) is pictured with the Dragon Eye UAV.

When the Liberty University School of Aeronautics began offering training in unmanned aerial systems in fall 2011, it was at the forefront of teaching this burgeoning technology to college students. Liberty became just one of a few universities in the country to have a program in operation and maintenance of unmanned aerial vehicles (popularly referred to as drones in their military application), joining Kansas State University Salina, the University of North Dakota, Embry-Riddle Aeronautical University in Daytona Beach, Fla., and Northwestern Michigan College.

"The School of Aeronautics is about preparing our graduates to be competitive in the job market,” said retired Air Force Brig. Gen. Dave Young, dean of the School of Aeronautics. “The new frontier in the aviation industry is in the area of unmanned aerial systems. We are very pleased, that even though the Liberty UAS program is in its infancy, our grads are already being employed.”

The School of Aeronautics’ emphasis in the field has already paid dividends as two alumni who have worked closely with it have been hired to operate UAVs.

Alumnus Jonathan “Stork” Washburn (’07), who majored in Interdisciplinary Studies (aeronautics and video production), credits the training he received at Liberty with his success as a UAV operator with Navmar Applied Sciences. Though there was not a specific program in UAV operation when he was a student, he was able to work with the department as they prepared to launch the program.

“My success in the field of UAVs has come only because of the incredible training I received in the School of Aeronautics,” Washburn said. “The professionalism and attention to detail in flight operations has stuck with me and helped me be a successful UAV pilot.”

Washburn was hired by Navmar in April 2011 and was deployed in Iraq. He is currently deployed in Afghanistan with United States military operations.

Joshua Tate (’11) graduated with a degree in aeronautics and served as an instructor for the Unmanned Aerial Systems program. Tate was recently hired to work with AAI Unmanned Aerial Systems out of Maryland. Tate will also partner with the U.S. military, as he will be deployed to Afghanistan later this summer. While there, he will continue to work on his master’s degree in management and leadership from Liberty. Upon returning from his one-year deployment, Tate will continue to serve as an instructor for Liberty’s UAS program.

“When you’re operating a piece of machinery that is that expensive and that sophisticated, you want to make sure that you have the best operator out there,” Tate said. “I believe that level of professionalism is what Liberty instills in its program.”

Liberty’s UAS program was recently featured in the Liberty Journal.