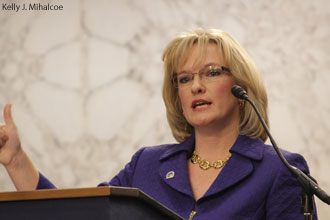 Alumna Jamie Radtke (’95) credits her education from Liberty University and the oft-repeated admonition of its founder, Dr. Jerry Falwell, Sr., to see champions for Christ make a difference in the world, with helping to equip and inspire her to pursue a seat in the U.S. Senate.

Radtke is deep down the campaign trail, seeking the Virginia Republican nomination for Senate in November’s election. Radtke, a co-founder of the Virginia Tea Party, hopes to receive the GOP nod in the state primary election on June 12.

Radtke’s interest in activism started in high school, when she sought to establish a Fellowship of Christian Athletes chapter and was met with opposition from the administration, citing separation of church and state. She fought back and won.

“That was really what put the fire in my belly, and when I started looking at schools I felt it was clear that Liberty University had a calling to empower the Christian voice, and I thought that it was the place the Lord would have me,” she said.

Early in her time at Liberty, Radtke struggled to reconcile her desire to pursue activism and to serve God, thinking one had to be in ministry in order to be “really sold out for God.”

“I remember the pivotal moment for me is when Beverly LaHaye came to speak in chapel,” Radtke said. “Here was a woman who was running Concerned Women for America; she was the first female I had ever heard speak who was involved in the political arena that was making a difference.”

She said that it was clear that LaHaye’s political activism was a full-time ministry.

“I thought, if Beverly LaHaye can do it — that you can be a woman, be involved in the political arena full time and that it can also be a full-time ministry — that’s what I want to do, and that really settled the internal conflict that I was having.”

Radtke earned her degree in government from Liberty after completing the Washington Semester Fellowship, to which she attributes the launching of her career. She served as an intern for the Senate Foreign Relations Committee, after which she was hired on full time.

She earned a Master of Public Policy from The College of William and Mary in 1998.

In 2004 she went to work for Virginia Conservative Action PAC as Political and Grassroots Director, where she said she focused on challenging Republicans who had strayed away from conservative principles. She started her own consulting firm in 2007, where she ran local campaigns.

In 2009 Radtke became swept up in the Tea Party movement. She co-founded the Virginia Tea Party and has been leading the movement in Virginia for the last three years.

She passionately seeks to bring accountability to government, especially in regard to spending. Her campaign has garnered attention thanks to her no-nonsense, blunt and often in-your-face approach to issues.

“We’ve got to have credibility as conservatives, that what we say and what we do are the same,” she said. “If we don’t deal with spending, nothing else matters. That is really the theme of my campaign.”

Radtke hopes to do something about the hypocrisy she witnesses in politics, where politicians say one thing as they campaign and do another once elected to office.

“That’s really what drives me. I can’t stand what I see (which) is a lot of hypocritical actions in both parties and I think we’ve got to get away and break that cycle,” she said. “I think that is really the heart of Liberty University, that you don’t have to look to some other company, some other organization, some other ministry, some other government or anything to solve a problem. You can be the solution.”

She explained that Falwell’s preaching in convocations while she was a student helped inspire her to take action rather than hope for change.

“One of the things he would always say is to be champions for Christ and to be bold, not to be bashful about what we think and believe, but then to actually carry through with it because actions are greater than words.”

Radtke and her husband, John, have three children — Abigail (age 8), Sarah (age 7) and Luke (age 4) — all of whom she homeschools.