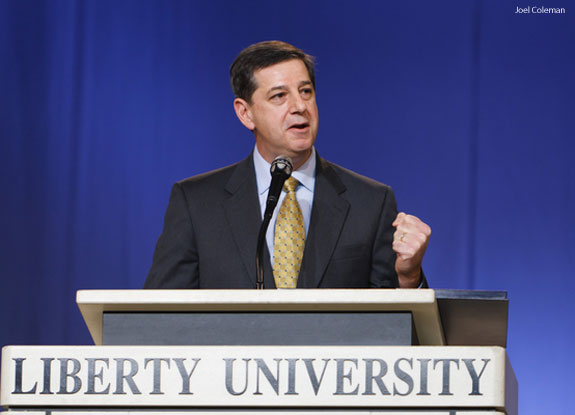 Bill Simon, president and CEO of Walmart U.S., challenged Liberty University students during Monday’s convocation to “be exceptional to make a difference” in the world.

Simon shared the story of his humble beginnings as a third-shift supervisor at a tobacco company to moving up the corporate ladder of success. Today Simon oversees more than 3,700 Walmart stores and 1.3 million associates across the country.

Employees and managers of local Walmart stores also attended the service.
Simon joined Walmart as the executive vice president of professional development in 2006 and was quickly promoted to chief operating officer for Walmart U.S., a position he held from 2007 to 2010.

In his first few months at Walmart, Simon headed a team that launched and created a program to offer $4 prescription drugs. With the high prices of medication in the U.S., Simon said he was inspired to make a practical difference in people’s lives. Since 2006, the program has saved Americans $3.5 million.

Simon told students that when he was in college he did not understand the impact he could have as a college graduate and a “world-changer.”

“Liberty is a place where your faith can be nurtured and strengthened, where you can receive the tools you need to make the world a better place,” Simon said.

He encouraged students to work hard, be disciplined and follow their passions because “average doesn’t give fulfillment in life,” he said. “To be average doesn’t show respect for gifts you’ve been given. Choose to be exceptional.”