UPDATE: View photos from the trip above. Photography by Timothy Moroz.

Liberty University students have been observing Missions Emphasis Week this week and now 110 students are on their way to Binghamton, N.Y., to practice what’s been preached.

Student volunteers will be spending five days cleaning out homes damaged by the floods from Hurricane Irene and Tropical Storm Lee last month. The trip was mobilized by the Southern Baptist Conservatives of Virginia, with transportation paid for by the North American Mission Board. The group will return on Tuesday night. 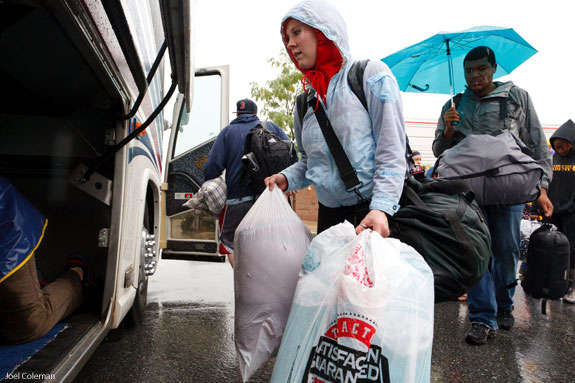 Another trip is being planned for next Friday, with 162 students traveling to Binghamton and 54 going to Montpelier, Vt.

Students gathered at Doc’s Diner Friday afternoon to board buses for the seven-and-a-half-hour trip. As the rain poured down, they still showed their excitement at the opportunity to help people whose homes have been damaged by excessive rainwater.

“Staying here and hanging out all weekend — I can do that any other weekend, when these people need help NOW, we need to help them,” said freshman Kristen Proctor.

Students first learned about the opportunity on Monday and attended training on Wednesday. So many students were eager to go on the first trip that they had to limit the number and some volunteered to drop their spot so others could go.

Junior Richard Allen was one of those volunteers, but he was told if he still came on Friday, he might have a chance of going on the first trip if someone didn’t show.

Just a couple minutes before students were called to board the buses, Allen arrived, out of breath, but telling an organizer, “I got everything packed and I’m ready to go.” As it turned out, there was room.

“I really want to go help people out,” he said. “My grandmother’s from Schenectady, which got totally wiped out by the storm.”

SBCV contacted Dr. David Wheeler, professor of evangelism and NAMB missionary liaison at Liberty, about the need on Monday. Wheeler then asked for volunteers in his classes.

“This is the heartbeat of Liberty University, this is what we’re about – helping people, taking the gospel into the world,” Wheeler said. “I saw students upset because they couldn’t go [on the first trip]. We had one girl who gave up her spot and she was crying. I was thinking, ‘You’re crying because you can’t go for five days to shovel mud?’ That speaks a whole lot about the value our students put on serving others.”

Chancellor Jerry Falwell, Jr. said when he saw the huge turnout, “it was heartwarming but not surprising.”

“I never cease to be amazed at how Liberty students place service to others above all else,” he said. “When outside groups visit campus, they often describe Liberty as an ‘authentic Christian community.’ Our students don’t just profess their Christianity; they live it. They make me proud to serve Liberty and are the best evidence that Liberty is fulfilling its mission of training champions for Christ.”

“We didn’t know what kind of turnout we were going to get when we first approached Dr. Wheeler with this. To have more than 300 students come and get trained with a 48-hour notice, and be ready to go, on a day like today, to go serve, is incredible — inspiring.”

This is the first time Liberty has partnered with Disaster Relief to send volunteers. The organization is the third largest disaster relief effort, next to the Salvation Army and the American Red Cross. Students will be tasked with digging mud out of basements, taking all the belongings out of homes, cleaning out water, mud and damaged drywall, then pressure washing the inside and sanitizing it to prevent mold growth.

“It’s a lot of hard, dirty work,” Gaughier said, but the residents “are going to be grateful, and the students are going to have a lot of opportunity to share the gospel, so that’s the primary reason we’re going, to share Jesus Christ with their communities.”