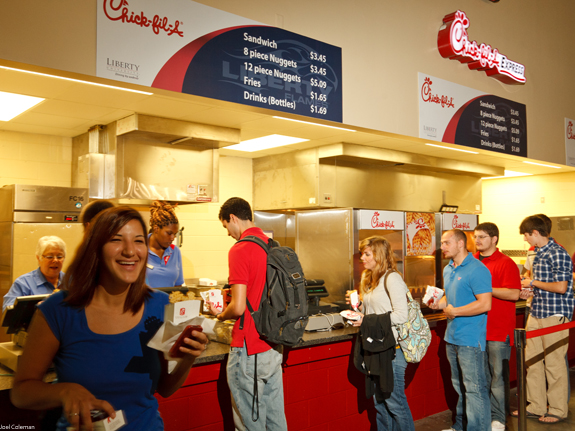 Liberty University students were provided with one more on-campus food venue this week as the new Vines Center food court opened for business.

Under the direction of Lee Beaumont, Liberty’s Director of Auxiliary Services, and Scott Starnes, Liberty's Director of Field Operations, construction crews and Sodexo employees (Liberty’s dining services vendor) worked around the clock and through the weekend to make sure the food court was open for lunch on Tuesday.

“From start to finish, we planned, got approval and started serving food in eight and a half days. Sodexo’s people, Field Operations and contractors worked extraordinary hours to make it all happen … they had to use every hour they got,” Beaumont said.

The project relocated vendors from Founder’s Food Court in Green Hall to the Vines Center and Tilley Student Center as part of the plan to make Liberty’s main campus the central location for academic programs. Last year, 24,000 students attended classes in Green Hall; this semester that number has been reduced to 7,000, with more classes being held in newly renovated space in Arthur S. DeMoss Learning Center and with Liberty Baptist Theological Seminary’s move to the Elmer L. Towns Religion Hall. These changes, in turn, caused long lines at Reber-Thomas Dining Hall and prompted the need for another main campus food venue.

“We’re really trying to do everything we can to give the students as many food options as possible,” Beaumont said. “Really what it comes down to is being able to accommodate a large volume of people in a short time frame. Normally when (students) have lunch, they’re squeezing it in between classes … and that’s where you have to have increased capacity.”

The Vines Center food court, which includes pizza, a la carte options, Jazzman’s coffee and Chick-fil-A, is a temporary solution until a main food court can be built in the new library. The library is part of a $120 million campus transformation to take place in the next five years.

By vacating the former Founder’s Food Court location in Green Hall, Liberty has helped nearby ministries as well. Liberty Christian Academy will acquire much-needed cafeteria space and Thomas Road Baptist Church will use the space for Sunday school classes.

More food service options are planned for the future, including Campus East Clubhouse and the Reber Café -- a late-night dining option that will be part of the Reber-Thomas Dining Hall. Eventually Sodexo plans to start a pizza delivery service on campus. Two Chick-fil-A exterior service windows will also be added near the Vines Center ticket booth so students will be able to order food when the Vines Center is closed for events.