Liberty University and the city of Lynchburg witnessed a historic event late Thursday night and early Friday morning with the installation of the 104-foot-long pedestrian bridge over Wards Road.

Despite the rain, hundreds of Liberty students gathered around the site, making a celebration out of the event with music and food as they cheered on the construction.

“It was a little more than I expected,” said Charles Spence, Liberty’s director of Planning and Construction. “The students stuck through the rain; it was a really big deal. … We erect steel structures in this world every day; it was very rewarding and satisfying to see the students so excited about it. That’s why we do what we do.” 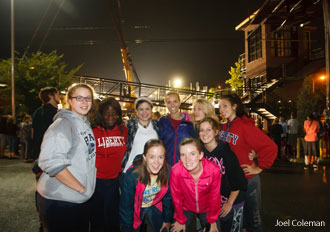 A portion of Wards Road was closed from 10 p.m. Thursday to 6 a.m. Friday while crews from Banker Steel installed the bridge in two sections. The first section, extending from the Sam’s Club side, went up about 12:30 a.m.; the second section, spanning across Wards Road from in front of Panera Bread, was put in place by 3 a.m. The bridge is expected to be open by the end of September.

The bridge is the result of the hard work and cooperation of Lynchburg and Liberty officials to make a safe crosswalk on one of the busiest streets in the city. The city is funding $1.35 million of the project, with Liberty paying for the rest. The estimated cost is under $1.5 million. The city will own the bridge and pay for capital repairs, but Liberty will have responsibility for day-to-day, minor maintenance.

Liberty planners approached city officials about building a safe crossing for students a few years ago. Construction began in July.

“A couple of years ago, we asked students to register to vote in local elections, and one of the things that came out of that, as a result of your participation, is a new pedestrian bridge over Wards Road,” he told students at Wednesday’s convocation, giving them permission to go view the installation from midnight to 2 a.m.

“This just proves how when young people get involved in local government, big things can happen,” said freshman Rachel Vos, who stood out in the rain to witness the event with girls from her residence hall.

Crews will be working for the next few weeks to pour concrete decking on the bridge, add lighting and install an elevator on the east side of the road. (The side near Sam’s Club will have a handicap ramp). The bridge is 8 feet wide, a comfortable distance for two-way foot traffic.

Liberty is currently constructing a tunnel under the railroad that will empty out by The Vitamin Shoppe, making it even easier for students to visit businesses along Wards Road. That project should be completed by November. 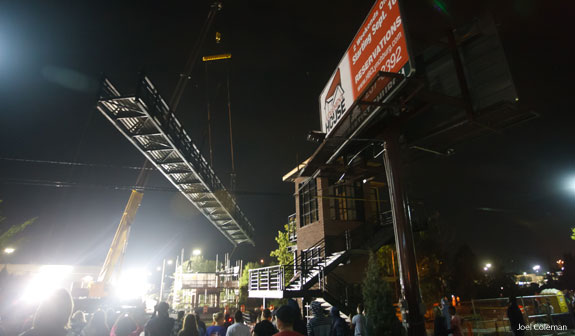