Pedestrian bridge will be great asset to city 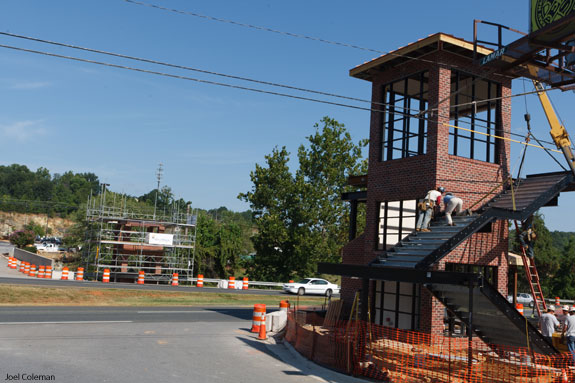 This is a view of the bridge from the west side of Wards Road, near Panera Bread.

Liberty University officials have worked hard to make one of the busiest streets in Lynchburg safer for all pedestrians.

The result is a 104-foot-long footbridge across Wards Road, on schedule to open by the end of September. It will ensure safety for people crossing from the area near Panera Bread to Sam’s Club. Liberty students will be able to access the bridge from main campus via a new tunnel.

Liberty planners approached city officials about building a safe crossing for Wards Road a few years ago. After looking at several options, including a lighted crosswalk, Chancellor Jerry Falwell, Jr. said the only way to make it safe without disrupting traffic was to build a pedestrian bridge.

“Our planning and construction team never ceases to amaze me.  I do not know of any other team that could have this bridge and tunnel built just a few months after it received final approval,” Falwell said. “Wards Road is the busiest commercial corridor in the city and we are thrilled to see that it will finally become safe for pedestrians.”

The city is funding $1.35 million of the project, with Liberty paying for the rest. The estimated cost is under $1.5 million.

While the city will own the bridge and pay for capital repairs, Liberty has agreed to take responsibility for day-to-day, minor maintenance.

The bridge meets the standard traffic clearance (higher than 18 feet) and is 8 feet wide, a comfortable distance for two-way foot traffic. It has an elevator and is fully handicapped accessible. It can also accommodate bicycles.