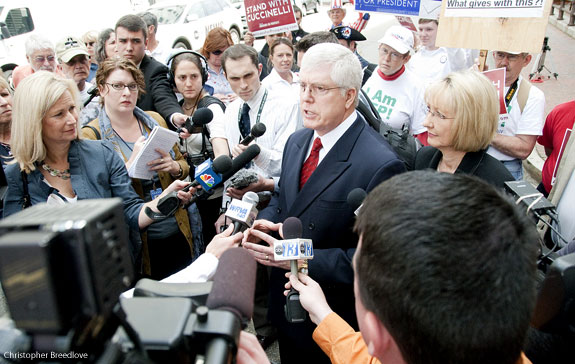 Mat Staver, Dean of Liberty University School of Law, talks to reporters outside the U.S. Court of Appeals for the Fourth Circuit in Richmond, Va.

Liberty University has gained national media attention this week following the hearing on the new federal healthcare plan at the U.S. Court of Appeals for the Fourth Circuit in Richmond on Tuesday, May 10.

The Liberty case was the first private lawsuit filed against the new healthcare law and the first to be argued at the court of appeals level.

“This is a landmark case that will likely go to the United States Supreme Court to decide not only this law but the role of the federal government and will therefore affect every American for generations to come,” said Mathew D. Staver, Dean of Liberty University School of Law. “I'm proud that Liberty University is leading the nation on such an important issue.”

The case challenges the constitutionality of the Patient Protection and Affordable Care Act signed into law on March 23, 2010.

Staver argued in the case of Liberty University v. Geithner that the government can’t compel citizens to buy health insurance or face adverse tax consequences from the federal government.

Staver led the argument on behalf of Liberty University. Other private individuals have joined Liberty as plaintiffs in the suit.

The court is expected to render its decision in the case within the next 45 days.

“This health insurance law redistributes wealth among private parties to achieve an alleged humanitarian idea. In doing so, the law goes far beyond the outer edges of the Constitution by regulating noneconomic inactivity,” Staver said. “ … This law is the beginning of centralized government. The stakes in the outcome of this case could not be higher.”

Audio for the case is available at www.ca4.uscourts.gov.