Whether you are up to bat with the World Series on the line, or getting ready to sing for a crowded auditorium, or studying for a test, facing fear is a part of life, Ben and Julianna Zobrist explained to Liberty University students in Friday’s Convocation. The key, they said, is finding strength in God to power through it.

Ben Zobrist is a professional baseball player with the Chicago Cubs. Over his career, he has contended for the World Series three times, winning twice — one of just seven players in history to win two years in a row with different clubs — and being named the 2016 World Series Most Valuable Player after leading the Cubs to their first crown in 108 years.

Julianna Zobrist is a singer/songwriter, fashionista, motivational speaker, and author of “Pull It Off: Removing Your Fears and Putting On Confidence.” She sang “God Bless America” at Wrigley Field before Game 4 of the 2016 World Series. Julianna performed her song, “Safe,” for Friday’s crowd. 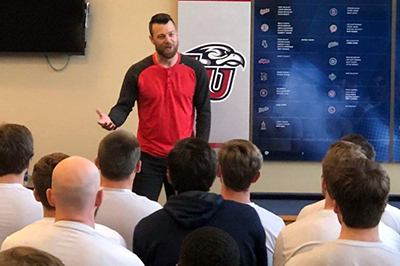 While the couple discussed their lives with the student body in Convocation, their overwhelming message was one of courage.

“Let’s reframe the way that we look at fear, less as something to avoid and more as something to catapult us toward our courage,” Julianna Zobrist said. “To avoid fear is to avoid courage. … You have an opportunity always to look at your fear, to name your fear, to name your insecurity, to release it of its power … and then to press forward and to not let it beat you.”

Life is not a competition, she added. “All of that really comes back to this knowledge and belief of our worth before Christ. This worth is what has been imprinted in us because of who God said you are.”

Ben Zobrist shared how he’s wrestled with depression. “There is hope, no matter where you are at … God loves you,” he said.

He also relived the moment when he was at the plate against Cleveland in extra innings of Game 7 of the 2016 World Series with two strikes against him and the game tied. He felt “sheer panic,” he said, before the hitting the double that brought in the winning run.

As someone who has always been chasing the next achievement in his career, Ben Zobrist advised students to enjoy the present.

“When you are early in your life, it is easy to think about what I want to get to,” he said. “But where does God want us to be? Right here, right now. … You guys all want to get somewhere, that is why you are here; Liberty is helping you get somewhere. But remember that God wants to do a work in you, right now, right here, and teach you things. Pay attention to that.” 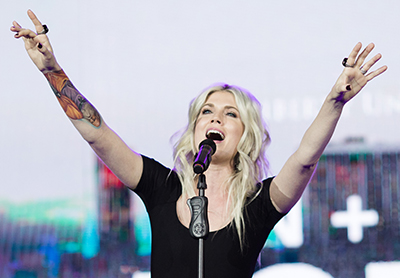 Ben Zobrist said he enjoyed his first visit to Liberty, and especially meeting with the baseball team, where he “felt encouraged and built up.”

Junior catcher Jonathan Embry said it was an “awesome opportunity” to sit down in the Liberty Baseball Stadium with Zobrist.

“He is a great role model to follow … seeing how he uses his position for the betterment of God’s kingdom as well as to inspire people just like us,” Embry said. “We are all trying to become that kind of player.”

Ben Zobrist told the team to be prepared to make sacrifices in life to win as an individual and as a team, as well as for character development.

“It was nice to have someone be able to pour into us,” she said, noting that Zobrist’s message about identity resonated with her. “I hear from girls around campus and in my group who are insecure. … I can take that and tell my girls, ‘God defines who we are, not the people around us.’” 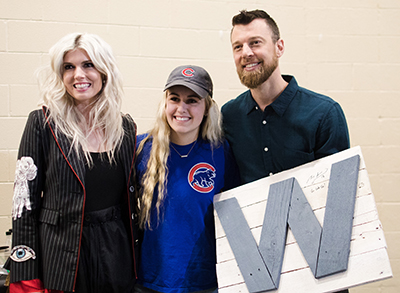 After Convocation, the Zobrists met with more students, taking pictures and even letting them hold Ben’s latest championship ring.

Sophomore Megan Kamphuis sat in the front row for Convocation with a wooden “W” sign modeled after the famous victory flag at Wrigley Field. She was elated to meet the couple.

“Their story and how they are using their platform to honor God is really inspiring,” Kamphuis said.