Three teams of Liberty University students will compete this weekend in the American Moot Court Association National Tournament, hosted by the University of Central Florida in Orlando. 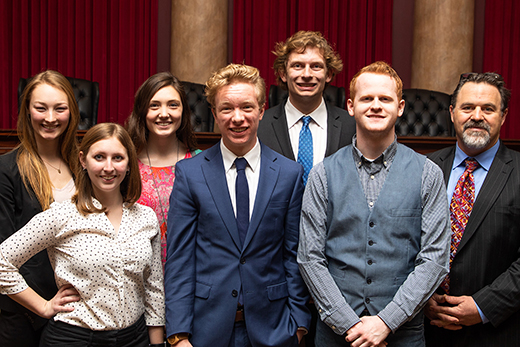 As a school, Liberty is currently ranked No. 9 in the nation. The teams earned the national bids after two competitive regional tournaments last fall in which more than 400 teams participated nationwide. At the Mid-Atlantic Regional, hosted by Regent University, the team of senior Blake Davis and junior Alyssa Rumbuc finished second overall, while Jacob Dyess was selected as second best oralist out of 72 competitors.

In Orlando, Liberty will face off in a field of 80 teams against students from Patrick Henry College, Regent University, the U.S. Air Force Academy, the University of Chicago, and more.

Moot Court operates through Liberty’s Helms School of Government. Competitions involve simulated courtroom appellate arguments between two teams (two students each) who present arguments before a panel of judges.  While presenting their arguments, participants must be prepared to field questions from judges and logically connect their answers to the arguments they are presenting. This year’s case involves First Amendment (free speech) and 14th Amendment (citizen rights and equal protection) issues.

“The amount of information they have to go through and memorize is pretty substantial,” explained Dr. Robert Robertson, Moot Court coach and assistant professor of government. “They have to be able to cite the cases in the record in their arguments and in support of their answers to questions.”

Rumbuc said she has appreciated the challenge of studying case law and legal precedent to structure logical arguments. The experience has helped her hone critical thinking skills and grow her faith.

“It’s great to be able to consider these issues in light of our Christian values and learn how to promote those, even in the law,” she said. “It’s been very valuable, especially today when there is a lot of dispute as to where the truth is in the law.”

Davis, her partner, qualified for nationals when he was a sophomore and is looking forward to returning.

“To be able to go to one final national tournament and represent Liberty well is great; it’s why we compete,” he said. “Dr. Robertson’s teaching — between Moot Court, Mock Trial, and the Pre-Law program — has been the formative experience for me going into law school.”

Liberty also competes in graduate-level moot court in the School of Law. In October, the team of Natalie Rhoads and John Riordan won the Billings Exum and Frye National Moot Court Competition, hosted by Elon University School of Law. View more awards and honors on the Liberty Law website.