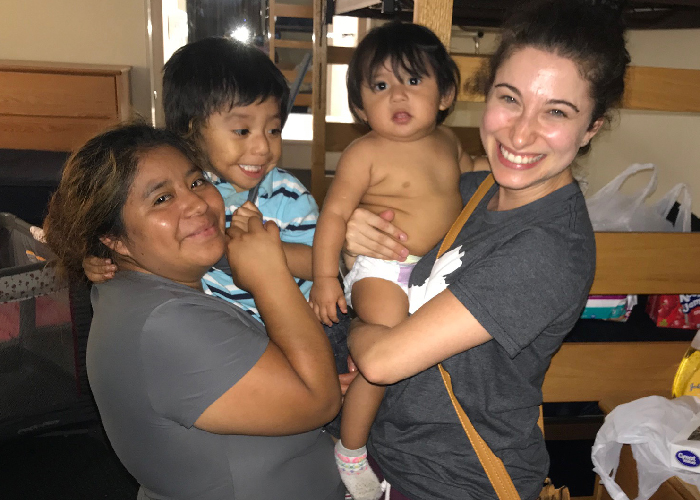 LU Send Now, the university’s disaster relief initiative, opened the facility on Odd Fellows Road on Friday free of charge to residents affected by the storm. Each of the rooms came with beds, furniture, and a private bathroom. Residents were also given bedding, toiletries, and snacks.

“I am very thankful that Liberty has been blessed with ample facilities where we can help our community in need,” he said.

The building, a former Ramada Inn, was converted into a residence hall in 2008. It recently closed after the new high-rise Residential Commons opened on campus. In April, Liberty opened the building to people whose homes were damaged or destroyed by an EF3 tornado in the City of Lynchburg and Campbell and Amherst counties.

A flash flood warning was issued late Thursday night after heavy rainfall in Lynchburg and the surrounding counties. In the City of Lynchburg, more than 150 people were evacuated from their homes.

Campbell County resident Gayle Doyle said Thursday’s weather reminded her of a monsoon. As the rain came down, she noticed that parts of her carpet were wet in her first-floor apartment near Waterlick Road.

“I went and checked on my neighbor across the way, and you couldn’t see her floor because there was so much water,” Doyle said. “We had to move to the second floor.”

Doyle said they lost nearly everything in the flood; her son’s car became submerged after he arrived to check on her. While she doesn’t know when she can go home, Doyle was still upbeat. Her cats, Angie and Sweet Pea, were safe.

“I’m very thankful that Liberty opened their doors to us,” she said. “I don’t know what I would have done without (Liberty).”

Lynchburg resident Curtis Chambers had been living in his car after the flooding destroyed his apartment. Chambers was grateful to finally have a bed to sleep in.

Welch said LU Send Now has been working with the American Red Cross and local churches to help with cleanup efforts in the coming weeks.