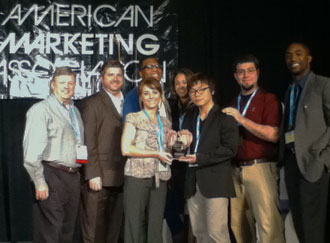 As part of the competition, the team, which included members of Liberty’s Student Marketing Association (SMA) chapter, made an oral presentation to Nintendo executives.

Liberty was among the top 10 national finalists, chosen from 64 university teams across the United States, Canada and Puerto Rico.

“To use the analogy of the NCAA Basketball Tournament, 64 teams entered the competition and Liberty University made it to the Final Four,” said Dr. Kendrick Brunson, an associate professor of marketing and the team’s faculty sponsor. “I told the team members that it is entirely possible that they may see some of their ideas in future Nintendo promotional campaigns. I am extremely proud of the students' efforts and believe they have learned many valuable lessons that will help them succeed in their future careers.”

The Collegiate Chapters Council of AMA has sponsored the competition since 1986 to provide members the opportunity to work together to develop a strategy for a detailed marketing challenge, which is submitted by a sponsoring organization. This year’s challenge was to develop an integrated marketing communications plan to attract potential segments for Nintendo and its current lineup of console and portable gaming devices and software in the United States.

Liberty’s team was established in 2003 and has participated in the competition for the past five years. The team has qualified as national finalists for the past three years.