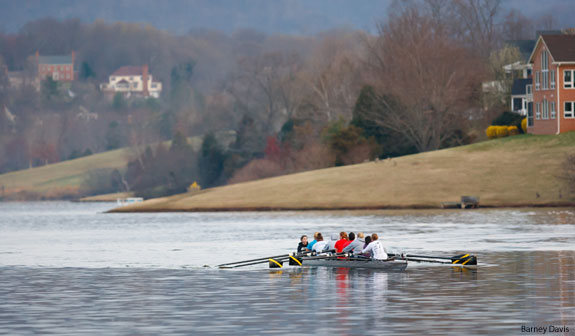 Liberty University's Men's and Women's Crew Team will kick off its Spring Sprint Racing season this weekend at home with a dual race with The College of William & Mary at Liberty’s Ivy Lake.

The event, scheduled to begin at 11 a.m. Saturday, will mark the first time the lake has been used for a sporting competition.

Founded in the spring of 2009, Crew/Rowing is a club sport at Liberty that currently consists of 52 student athletes led by head coach Mark Furler and assistant coach Karolyn Milton.

Furler said Saturday marks a major milestone in the program.

"Many of the athletes have worked every weekday tirelessly waking before the first light of the day for years to create a healthy program which emphasizes hard work, discipline and persistence in a manner which glorifies God,” he said. “This weekend will both showcase the lifestyle of our oarsmen to the greater University population and provide some fierce competition against William & Mary, a very formidable, growing, and well-respected rival crew whom we’ll see throughout the year.”