As Flames Football prepares for its first season of play as an FBS independent program, more good news is coming its way. 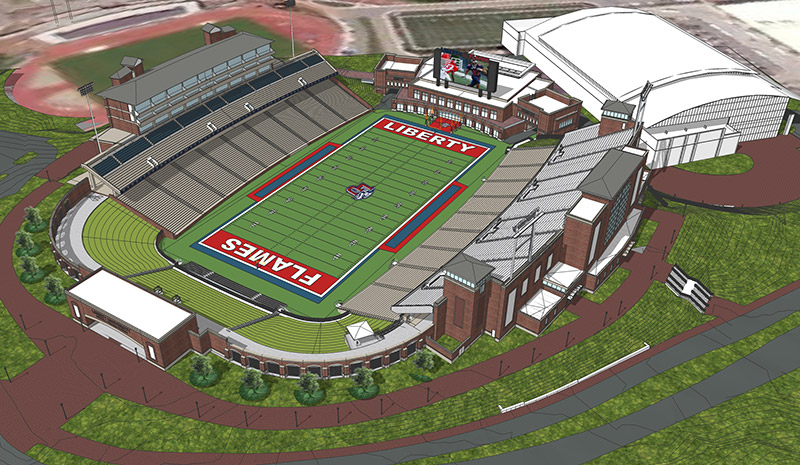 The university has announced a major upgrade and expansion to the Arthur L. Williams Football Operations Center (FOC), to complement the ongoing expansion at Williams Stadium. Two-story additions to both the east and west sides of the building will bring the center from 48,000 to about 75,000 square feet and help round out the stadium’s bowl shape. The renovated facility will be adjacent to Liberty’s spectacular new Indoor Football Practice Facility that opened last summer.

Construction is expected to begin after the last home football game this year.

The entire building will receive exterior and interior renovations. A spectacular player lounge on the ground level will double as a recruiting area for football as well as other NCAA Division I sports. The second story will feature patios that look out onto the field.

The team locker room and lounge will be renovated and enlarged, with room for over 100 lockers that will be arranged in a spoke layout, so that coaches can better address all the players. 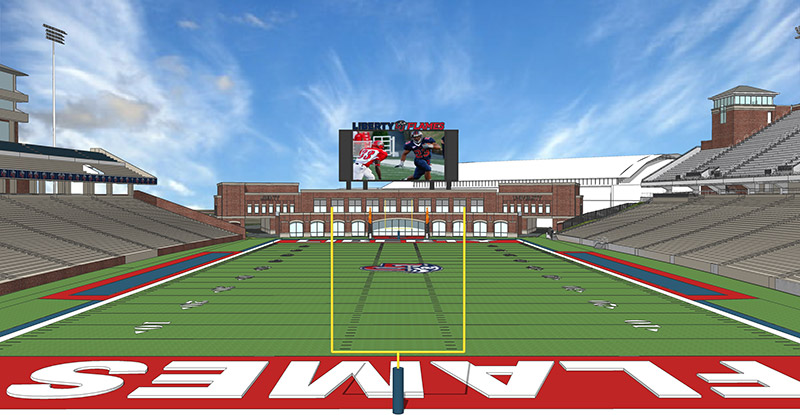 The training room will receive many enhancements, including oversized plunge pools. A state-of-the art weight room and nutrition center, currently in the lower level, will also be expanded as offices housed there will be relocated to the additions. The new building space has been designed to allow for natural skylighting, with sunlight shining through from the top floor into the weight room. Studies conclude that training with sunlight has many benefits for student-athletes.

Plans also call for the soccer locker room, currently located next to the soccer stadium behind Williams Stadium, to be incorporated into the west-side addition of the FOC. That will leave more space to expand the north stadium entrance and add more security checkpoints so fans can enter faster.

The FOC opened prior to the 2006 season and was made possible because of a generous $4.5 million donation from the Art Williams Foundation.