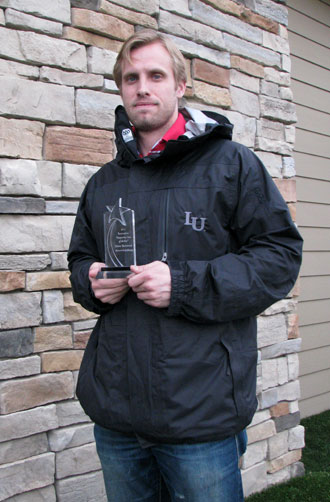 Liberty Mountain Snowflex Centre opened in August 2009, and it wasn’t long before area tourism officials began to notice that the new attraction, located on the campus of Liberty University, was a good partner to have in helping to draw visitors to the region. Through the cooperation of the university and the Lynchburg Regional Convention and Visitors Bureau (LRVCB), Snowflex, the only year-round ski slope of its kind in North America, has become part of the LRVCB’s tourism campaign, “Discover Lynchburg.”

“Lynchburg city realizes what they have in their backyard now,” said Drew Sherwood, general manager of Snowflex.

Sherwood, a Liberty alumnus, was recently honored by the LRCVB at an awards ceremony held at the Snowflex lodge. He received the Hospitality Star of the Year Award in the Recreation category.

In presenting the award, Beckie Nix, director of the LRCVB, said Sherwood “is someone who always provides superior customer service … and his welcome smile makes every visitor feel at home. He has helped his facility to run smoothly and goes out of his way to make sure everyone is completely satisfied.”

She said visitors have written letters praising his high standard of performance, as well as the memorable way they were treated.

Sherwood, who oversees a staff of 70 employees and eight managers, said customer service is the goal.

“One of our greatest accomplishments would be when a customer leaves here saying how much fun their children had, or they had, because of our staff and how much they love on the customers when they come in.” he said. “Customers are coming back not because of the ski experience, but because of the customer service relationship we have.” 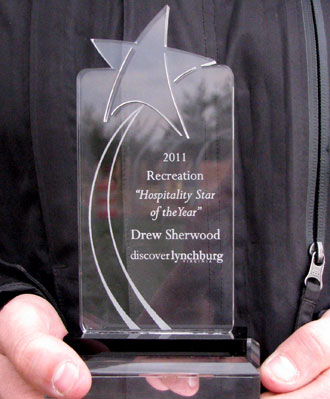 “They know it’s to their benefit to encourage businesses and individuals to promote the city. … They realize that if they show their support to individuals or businesses by helping them out, by giving them resources and awarding them for their hard work, that everything seems to work out.”

Snowflex has entertained guests from all over the country, and even some from outside the country.

“We’ve seen large groups from Canada, people from California, Washington, Oregon, from the Midwest, Florida, everywhere around, just coming to spectate Snowflex and Liberty. And because of that the hotels see benefits from us, and the food industry and retail stores,” Sherwood said.

“Snowflex is something that both Liberty and Lynchburg can call their own, that no one else in North America can.”