A large, gleaming silver trophy captured the attention of Virginia’s legislators on Tuesday as Liberty University was recognized at the Virginia General Assembly for becoming the first Virginia institution since 1932 to win the prestigious Loening Trophy, presented to the outstanding overall collegiate aviation program.

Senate Joint Resolution No. 79 commended the program for its impressive accomplishments. 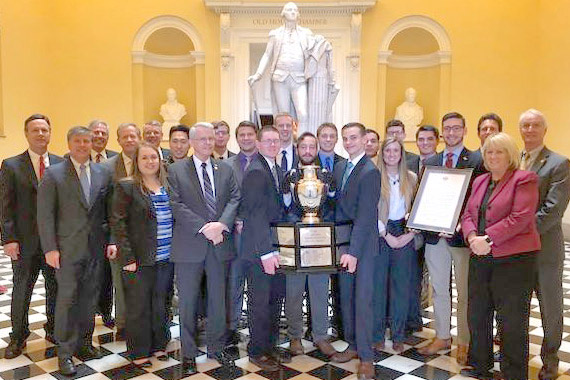 The award is presented annually at the National Intercollegiate Flying Association (NIFA) National SAFECON competition. Liberty won the award last May. The Loening Trophy, made of pure silver and custom designed by Tiffany, is the oldest award in collegiate aviation. Charles Lindberg and Amelia Earhart were among the judges for the inaugural competition in 1929. Schools are judged on a number of criteria, including competition performance, aviation skills, community involvement, safety, and academics.

Leaders from Liberty, School of Aeronautics faculty, and students from Liberty’s NIFA Flight Team visited the Capitol in Richmond Tuesday, where they were recognized before both the Senate of Virginia and the House of Delegates. They met with local representatives, including State Sen. Steve Newman, Del. Kathy Byron, and Del. Scott Garrett.

“It was an honor to welcome the Liberty University School of Aeronautics to the Capitol today,” Newman shared on Facebook. “The award not only represents superb achievement in aeronautical skills but more importantly represents the current benchmark for an overall outstanding collegiate aviation program.”

From the floor of the House, Byron had the hefty trophy brought in and displayed atop her desk as she delivered a speech that included the trophy’s history and highlighted a number of Liberty’s accomplishments.

“This was significant,” said Jim Molloy, dean of Liberty’s School of Aeronautics. “The trophy is huge and attracted attention everywhere we went. … After this day, all the legislators know about Liberty University’s aviation program and its accomplishments. They know about this treasure we have here in Virginia.”

Molloy said he was proud of how the students represented the university.

“They are here demonstrating the importance of aviation and this next generation to the industry.”

Recent graduate Katie Wagner was a member of the winning NIFA team last year and now  serves as a coach.

“I was happy to represent Liberty as a whole and to see our school recognized for aviation,” Wagner said Tuesday. “The trophy represents Liberty and all of the work the team puts in, all the community service it does, and the awareness it raises for aviation. It was an honor to present it and receive recognition for the team’s efforts.”