Billy Graham: Remembering a faithful servant and a dear friend of Liberty 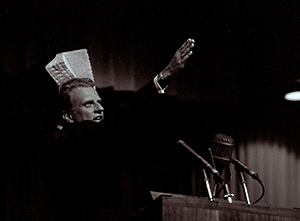 As Liberty University and the nation mourn the loss of one of the greatest American evangelists of our time, thoughts and prayers go out to a family who has meant so much to the university over the years.

“It has been a sad day on our campus as we mourn the loss of the Rev. Billy Graham,” said Liberty President Jerry Falwell. “The Christian faith has lost the greatest communicator it has had over the last century. He took the message of salvation to billions of people, giving them hope that even though we are all sinners, we can have eternal life through faith in Jesus Christ. It was a simple Gospel, but nobody could communicate it like he did. He inspired so many people and gave them a reason to live. Many of Billy Graham’s family were students at Liberty, and they are close friends. The Liberty family will continue to keep them in our prayers.” 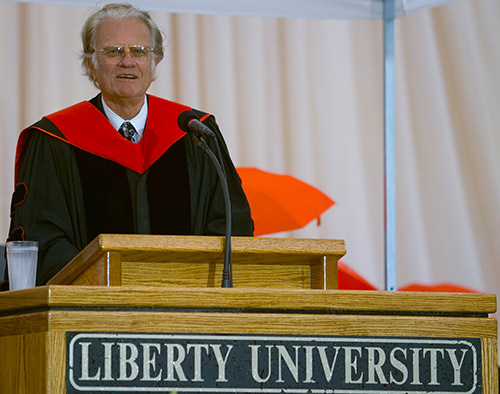 The Falwells and Grahams have grown close over the years.

“I made a special trip to Chapel Hill, N.C., while I was in college in the early ’80s to attend a Billy Graham crusade,” Falwell said. “Becki and I also attended his 90th and 95th birthday parties and the opening of his library in Charlotte, N.C., about a month after my Dad died in 2007. The fact that four U.S. presidents spoke at that event was proof of how highly respected he was.”

“He had a gift of communication that nobody else in the Christian faith ever had, and he used it,” he said. “He wasn’t divisible; he didn’t take sides. His gift was to preach the Gospel, and he knew that anything else he did would take away from that.” 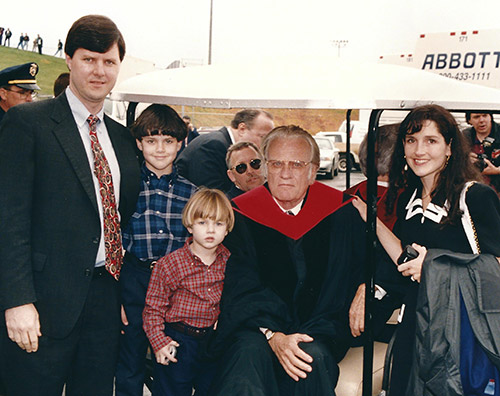 In national television interviews on Wednesday, Falwell said Graham was a household name decades ago, reaching millions on television when there were only a few channels and the regular programming would be interrupted to show Graham’s sermons from his crusades. He said Graham leaves a huge legacy for future generations.

“So many Christian leaders today were converted through his ministry or through someone who was influenced by someone else who was converted through Billy Graham’s ministry, including my father. Our students know about the history, even though they didn’t live it, and are well aware of that.”

Billy Graham’s official obituary calls him an “evangelist to the world.” It reads: “Throughout his life, Billy Graham preached the gospel of Jesus Christ to some 215 million people who attended one of his more than 400 Crusades, simulcasts and evangelistic rallies in more than 185 countries and territories. He reached millions more through TV, video, film, the internet and 34 books.” 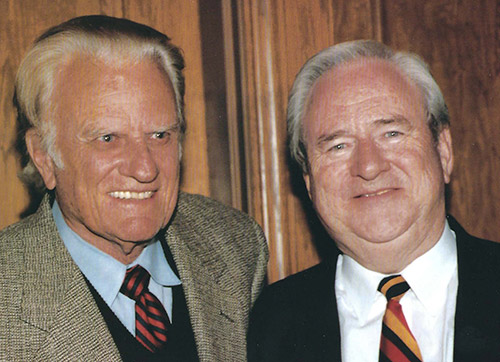 While his primary focus, it said, was to take the message of salvation to the world, “he also provided spiritual counsel to presidents, championed desegregation, and was a voice of hope and guidance in times of trial. In 2001, he comforted his country and the world when he spoke at the National Cathedral in Washington, following the Sept. 11 terrorist attacks. At three global conferences held in Amsterdam (1983, 1986, 2000), Graham gathered some 23,000 evangelists from 208 countries and territories to train them to carry the message of Jesus Christ around the world.”

Graham delivered his final message in 2013 via more than 480 television stations across the U.S. and Canada. More than 26,000 churches participated in this “My Hope” project, making it the Billy Graham Evangelistic Association’s largest evangelistic outreach ever in North America.

(Read more on the life and legacy of Billy Graham and send your memorials and condolences on the Billy Graham Evangelistic Association’s memorial site.) 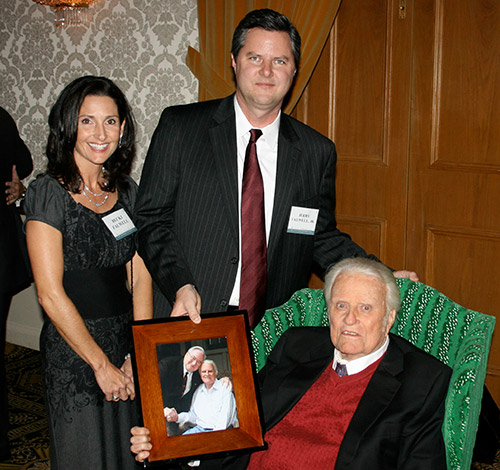 Liberty has had many ties to the Graham family and their ministries over the years. Billy Graham addressed graduates at Commencement in 1997. His son, Franklin, has visited Liberty many times, delivering keynote addresses at Commencement in 2001 and Baccalaureate in 1996, as well as speaking in Convocation. Franklin Graham also spoke at the funeral of Liberty’s founder, Jerry Falwell, Sr. Many Graham family members attended. Anne Graham Lotz, the daughter of Billy Graham, has also spoken in Convocation.

Franklin Graham’s son Will, a 1997 Liberty alumnus, currently serves on Liberty’s Board of Trustees. He works with the Billy Graham Evangelistic Association as executive director of the Billy Graham Training Center at The Cove in Asheville, N.C.

Several of Billy Graham’s grandchildren and great-grandchildren have attended Liberty. His grandson Basyle J. Tchividjian is a professor at Liberty University School of Law.