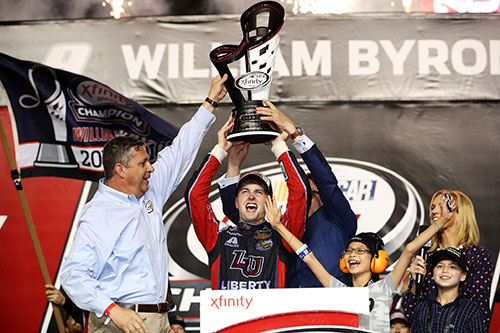 Byron, 19, coming off his JRM rookie-record fourth win of the year last Saturday at Phoenix Raceway, held off runner-up Sadler in the final points standings, 4,034 to 4,029. He celebrated the championship with a smoky tire-spinning burnout, leaving skid marks on the race logo of the 1.517-mile track.

“I don’t think I breathed the last 20 laps,” Byron told NASCAR.com in a post-race interview. “(Sadler) raced me clean and we just raced hard for it. I can’t believe this. That was incredible. This is awesome. I’ve just got to thank God for giving me this platform to perform. It was an unbelievable crowd.”

Fellow 19-year-old driver Cole Custer was the race’s overall winner and moved into fifth place in the standings with his first trip to Victory Lane. 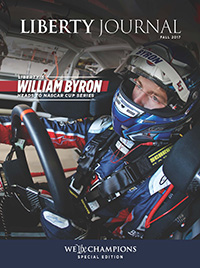 Byron will move up to NASCAR’s Monster Energy Cup Series in 2018, on the Hendrick Motorsports team. Liberty will continue to be a primary sponsor in the 2018 and 2019 seasons.

He will make his debut in NASCAR’s top series behind the wheel of the No. 24 Liberty University Chevrolet Camaro ZL1 at the Feb. 18 Daytona 500, the sport’s most celebrated race. Byron unveiled that car, sporting the No. 24 made famous by NASCAR veteran Jeff Gordon for 23 years, during halftime of Liberty’s Oct. 14 Homecoming football game at Williams Stadium. Byron, Rick Hendrick (owner of Hendrick Motorsports), and Gordon were special guests at Liberty’s first Convocation of the Fall semester on Aug. 30 in the Vines Center.