An excavator rolled up to the Elmer Towns Religion Hall last Wednesday, crashing its metal teeth through the hide of the brick structure. With that, crews cleared away the 35-year-old building to make space for a new one more than double its size.

The Religion Hall, completed in 1982, has primarily housed Liberty’s divinity programs. With the building of Freedom Tower, the Liberty University Rawlings School of Divinity will have a new home in Spring 2018. Once demolition is complete, crews will immediately begin construction on a new building for the School of Business. The 3-story, 80,000-square-foot building is scheduled to open in Fall 2018. 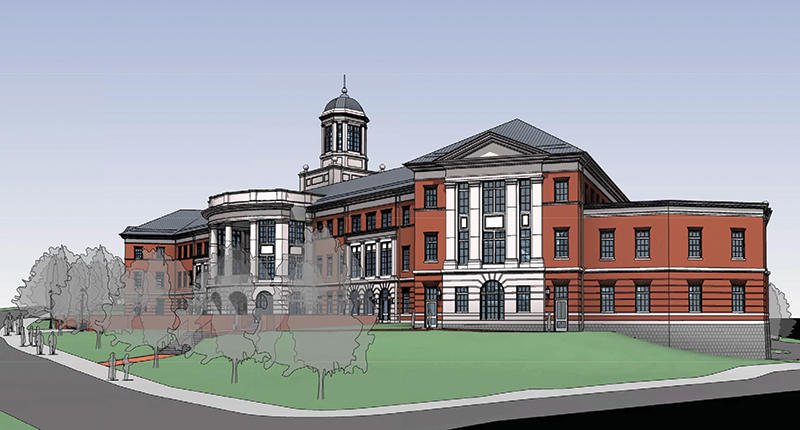 Plans for the new School of Business building include a grand lobby, a 500-seat auditorium, and a number of innovative classrooms and meeting spaces — from information technology labs to networking and data centers, a simulated stock trading room, and a 2,000-square-foot Entrepreneurship Center for Innovation — that will serve students as well as the local community. The building will have a public entrance facing U.S. 460 and a student entrance in line with Reber-Thomas Drive. The building will complement the classical Jeffersonian architecture of Liberty’s main campus, as reflected in nearby DeMoss Hall, and will serve as an aesthetic landmark for drivers passing by. Its interior design will also be immaculate with a stylish, professional look suited to the future financial, technological, computing, informational, and entrepreneurial leaders of the world.

The university finds itself in a season of immense blessings, closing in on completion of a nearly $1 billion campus rebuilding. The young institution, founded in 1971, has blossomed after decades of financial difficulty, fueled by prayer and the generous giving of individuals who believed in Liberty’s mission to Train Champions for Christ. 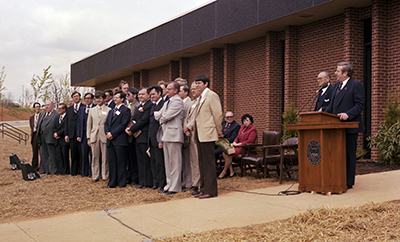 When it was dedicated on April 25, 1982, Religion Hall was one of the fruits of those early years — a welcoming addition to a campus just beginning to take shape. While it housed Liberty’s undergraduate divinity program (then called the B. R. Lakin School of Religion), the space has been utilized for a number of other purposes over the decades. Other university departments to occupy space in the building have included the Office of the Registrar, the university print shop, academic advising, the art program (now the Department of Studio & Digital Arts), and the worship program (now the Department of Music & Worship).

In 2008, the building received a facelift, including a new columned façade, courtyard, and an expansion with a 750-seat lecture hall.

Dr. Harvey Hartman, professor of biblical studies, has witnessed those changes from his office — a space that he has remarkably kept from the day the building opened until the building was vacated after Commencement.

“That consistency has been nice. Students could always find you,” he said. “I always enjoyed having the students come. It was interesting to have them return after many years and still find me in the same place.” 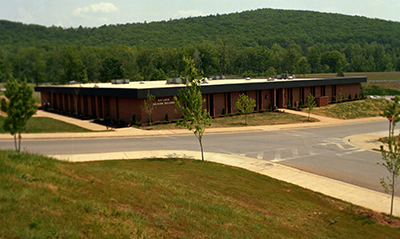 Hartman started at Liberty in 1977, the first year campus was located at the present location. Back then, campus was being converted from an old farm with no major road access. Faculty drove onto a pasture that was mostly mud if conditions were damp.

“I remember seeing some faculty coming into the classroom in a suit and tie — and knee-boots. It was quite the combination,” Hartman said.

From his office at Religion Hall, Hartman said he often stepped outside to watch the campus develop. He witnessed a single-floor DeMoss Hall rising from the mud, then the Vines Center.

“You could see so much from right there,” he recalled. “It has been very intriguing to watch.”

Hartman looks forward to a new office in Freedom Tower, the new centerpiece of Liberty’s campus. Staff is scheduled to move into the tower during Christmas break, just prior to the building’s opening at the start of the Spring 2018 semester.

Watch construction projects as they unfold in real-time at Liberty.edu/LiveCams.