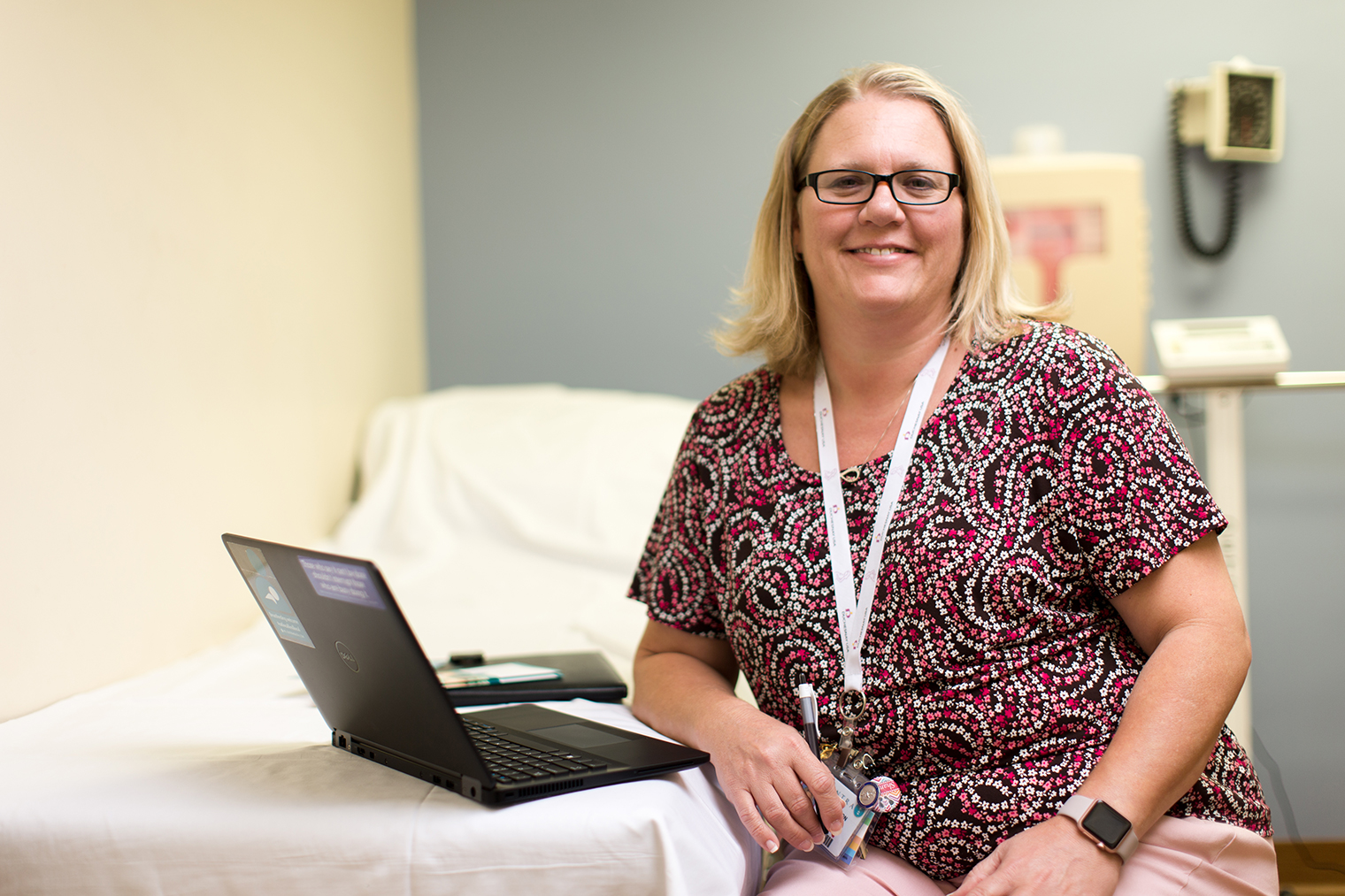 Baby pictures from her former patients decorate the office of Liberty University alumna Shannon Miles (’13) at Virginia Baptist Hospital in Lynchburg. They are a constant reminder of what she is fighting for on a daily basis: the success of mothers and their babies recovering from opioid addiction. Over the last decade, Virginia alone has seen three times more babies born with neonatal abstinence syndrome (which refers to the problems that occur when exposed to addictive opiate drugs in the womb).

According to the U.S. Department of Health & Human Services, more than 12.5 million people in the U.S. misused prescription opioids in 2015, and the number has continued to climb. About three years ago, Miles, then serving as a nurse navigator for Centra (a regional health system), realized that Lynchburg was not exempt from the problem.

As a nurse navigator, Miles works with expectant mothers, answering their questions, making appointments, and guiding them through their pregnancies. What she didn’t expect, however, was the rising number of patients who told her that they were struggling with opioid dependency.

Miles knew something had to be done to get these mothers the necessary care to protect themselves and prevent miscarriages and further damage to their babies. “I called up all of our contacts at the hospital, and we met in a small room in the basement of the hospital to figure out what we needed to do,” Miles said.

That meeting led to the creation of two community coalitions that aim to combat opioid abuse in the Lynchburg area. It also led to the creation of Centra and Roads to Recovery Inc.’s Residential Recovery Program for Pregnant and Postpartum Women near VBH in Downtown Lynchburg, which opened in January. It is the first program of its kind in Central Virginia.

Currently, 20 pregnant and postpartum women are enrolled in the medical assistance program, while the home is able to accommodate up to four women and their children.  The program allows them to recover from addiction in a safe space to care for their babies and receive in-house counseling. Mothers can stay at the residence for up to a year after giving birth.

“The other piece of this problem is that some of these women were scared to go home without drugs because they lived with someone who is addicted to medication and the women feel pressured come back with a prescription,” Miles said.

In May, Miles was honored with Centra’s Magnet Nurse of the Year Award for her work. The award highlights a nurse who has shown transformational leadership, structural empowerment, exemplary professional practice, and new knowledge and improvements.

“It was shocking because you’re nominated by your peers,” she said. “It’s hard to imagine that I only graduated a few years ago. It means a lot. All I want to do is help other people.”

Also, due to the success of the program, Miles has visited other health care systems across the state, helping them learn how to establish similar programs based on Lynchburg’s model.

“When we first started this effort, no one was talking about the opioid epidemic,” she said. “We would call insurance providers and ask about treatments, and no one knew what we were talking about. Now it’s gaining national attention, and more and more people want to do something about it.”

Miles said that Liberty not only taught her the skills she needed for a career in nursing, but also encouraged her to follow her passion and make an impact in the field.

“I knew that I wanted to work with mothers and babies. That’s where my passion is, and Liberty ignited that to fight for those who need a voice,” she said. “In Liberty’s nursing department, we always say we are to be the hands and feet of Jesus, and that’s what this is.”

Miles has already given back to her alma mater by providing chances for nursing students to tour the home and attend the coalitions.

“Shannon's work is focused on placing value on the lives of mothers and babies.  Her care for pregnant and postpartum women, as well as their babies (both born and unborn), evidences the worth placed on a life, regardless of factors which may have impacted that life,” said Linda Gregory, assistant professor for Liberty’s School of Nursing. “The Lord has opened a door of opportunity for Shannon to be His hands and feet in the Lynchburg community as she ministers to a specific population.  Through the profession of nursing, Shannon is selflessly serving others for God's glory. “

What makes it all worth it is seeing the babies and their mothers thriving, she said.

“That’s what matters,” she said. “Those children are our future, and they can’t fight for themselves, so we have to do it for them. Then, to see their mothers come out successful and healthy, that’s the most meaningful thing.”