National Basketball League (NBA) superstar Stephen Curry visited Liberty University’s Vines Center on Wednesday to do something bigger than score points in a hoop. He joined Liberty students in an effort to collect 20,000 pairs of shoes for the needy in Africa as part of a Kick’n It for a Cause humanitarian partnership. Students were encouraged to bring a new or gently used pair of sneakers to Convocation to be shipped to the Democratic Republic of the Congo (DRC). (View a photo gallery of the event below.)

The drive was started by alumnus and current graduate student Emmanuel Ntibonera, a native of the DRC, whose family ministry, the Ntibonera Foundation, collects shoes for those who do not have proper footwear and are vulnerable to disease. Ntibonera approached Liberty to help him ship the shoes overseas, which the university agreed to do — and more. Liberty connected him with alumnus Chris “COSeezy” Strachan, the founder of Kick’n It, a lifestyle brand that utilizes pop culture and sneaker fashion to empower community service efforts. Together, they sought to double the 10,000 pairs of shoes already collected. Then the effort got even larger when Curry joined the cause. Curry is a friend of Strachan’s and a member of Kick’n It’s advisory board.

The drive garnered a massive response. Nike, Liberty’s basketball sponsor, donated 500 pairs of shoes and Under Armour sent 1,000 pairs of shoes — 500 the organization donated and another 500 Curry purchased himself. Through Kick’n It, a massive social media campaign was held. Students were asked to make a video showing the shoes they would bring and then challenge three others to do the same. Participants from across the nation, including Golden State Warriors Assistant General Manager Kirk Lacob, basketball analyst Rosalyn Gold-Onwude, and Black Hollywood Live host Rheina Ale, joined in the challenge. Liberty cinematic arts student Caleb Natalie created a video that was featured in Convocation and won him a chance to meet Curry backstage. 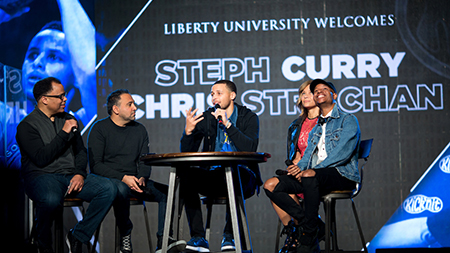 Curry was welcomed to Liberty’s stage by President Jerry Falwell, who boldly compared him to NBA legend Michael Jordan.

“I think he is going to be the next Michael Jordan if he hasn’t already surpassed him,” Falwell said. “Stephen Curry is renowned for his shooting accuracy. He was the first person to be named Most Valuable Player (MVP) by a unanimous vote in NBA history.”

While Wednesday’s visit to Liberty’s Convocation was a first for Curry, his wife, Food Network celebrity chef Ayesha Curry, was a featured guest last November. She joined her husband at Liberty, along with his mother, Sonya, who sat on the stage with him. Curry’s younger brother, Seth Curry — currently of the NBA’s Dallas Mavericks — played his first collegiate season at Liberty, where he led all freshmen nationally in points per game and broke the Big South Conference single-season scoring record for a freshman.

He also encouraged the crowd in their faith.

“It is amazing to be here and to feel the love and the vibe and the passion for Christ that is here,” Curry said. “I commend you guys for creating that kind of environment. Part of that is being confident in your abilities and the platform that God has given you and using that platform to shine the light back to Him. That is the only reason that I feel like I do what I do and I have been blessed with the talents that I have.

“The Lord has blessed me with these talents to do something special. But it is not about me. That is something that I want my career and my life to be a reflection of His love and His grace and mercy. Whether it is winning games, losing games, making shots, missing shots it is all about giving glory to God.”

“One of the things that I prayed for in raising my boys is that even in college that the Father would put good men in their path that would continue to be light and example to them,” she said. “We are not guaranteed to be here every day but the Word of God applies forever. People disappoint you and situations disappoint you but you’ve always got God.”

McKay noted that Strachan was instrumental in recruiting Seth Curry to Liberty while he served as a team manager for the Flames.

Strachan expressed his appreciation for his alma mater and how it shaped him into the man he is today.

“I want to use the things that I am passionate about to put smiles on people’s faces and to bring people together,” he said. In just its first year, Kick’n It has already been involved with three major fundraisers and has held media events in underserved communities across the nation.

On his recent partnership with the Ntibonera Foundation, Strachan added: “We all have a bunch of sneakers in our closets that we don’t use that are collecting dust. Why can’t we get one pair and send them over there and change somebody’s life. One of those kids could become something amazing, create something amazing, we don’t want to hinder them because they don’t have a pair of sneakers, let’s help them out.”

Much to the delight of the enthusiastic crowd, Curry stepped onto the hardwood to showcase his shooting ability. He made a three-pointer to add $500 for the cause. President Falwell, Ayesha Curry, Strachan, Coach McKay, and even Sonya Curry also took shots to help add to the total. The students erupted with cheers when Falwell went one-for-one on the hoops.

Students and members of the community packed the Vines Center to not only see the NBA all-star but join the Kick’n It cause. Bins were set up along the concourse of the Vines Center for people to drop off sneakers. Several of the bins were overflowing.

After Convocation, freshmen Madison Kennerly, Leah Fabian, and Jayla Arthur posed with the sneakers hung up on rails on the floor of the Vines Center, along with Kennerly’s sister, Maegan. The friends each decorated signs showing their support for Curry and his wife, Ayesha. The girls also brought five pairs of sneakers to donate to the cause.

Madison Kennerly said as college students, they are looking for opportunities like this to help others. Donating shoes, she said, was a great way to give back.

“I think sometimes we can feel stuck,” she said. “But doing something like this is a great way to impact people around the world while we’re still here on campus.”

Freshmen Nadia Amezaga and Sarah Saquian brought a pair of sneakers to add to the bin. Sporting their Golden Gate Warriors gear, the two friends had lined up outside of the Vines Center at 8:30 a.m.

“To see Steph Curry come and speak is really awesome,” Amezaga said, who is a San Diego native. "I got to meet Ayesha Curry when she was here.”

Wearing her Warriors jersey, Bedford resident Yarnetta Sellers came out early to get a good seat to see her favorite basketball player speak.

“He’s not selfish and you can see that he’s devoted to the Lord,” Sellers said.

Also during Convocation, President Falwell introduced another special guest, Dennis Coleman, a partner at the law firm Ropes & Gray, who was instrumental in helping Liberty successfully make its case to be granted a waiver from the NCAA to move to the FBS level in football.