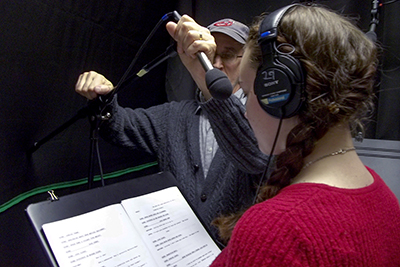 Students from Liberty University’s School of Communication & Creative Arts will hear their work broadcast when “The Encounter,” an original radio drama, premieres on 90.9 FM The Light and the station’s website tonight at 8 p.m. The first season will include 15 episodes, airing each Wednesday night through May 3, with encore airings Sunday at noon. The 15-minute episodes will be available free for download on iTunes as they air.

“The Encounter” is a mystery drama set in a dystopian future where two societies — the Peak of Defiance and the Peak of Reliance — are separated by a mysterious mist and have developed their own separate worldviews and cultures. The primary teenage characters, Roy, Sam, Ann, and Violet, each begin to experience circumstances that cause them to question what they have been taught in their respective societies, setting them on a journey to uncover the truth.

The drama was produced, written, and edited by students, including the score, which was composed by graduate music student Preeda Thaiwatcharamas. 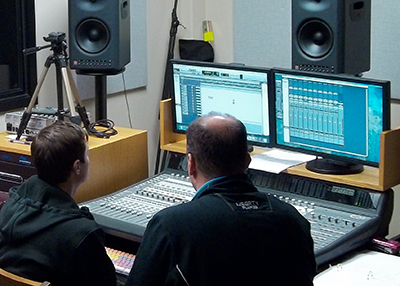 The story was conceptualized by Chris Nelson, associate professor of theatre arts and the project’s executive producer. The drama was then brought to life over the course of two years as students from select courses, including theatre production and sound editing (through the digital media program), sharpened their talents working on the project. More than 100 students, including writers, actors, production/sound editors, musicians, and marketing/PR coordinators, have participated.

“This project has benefited many students from across many disciplines,” said Nelson, who worked alongside professor Chris Underation and assistant professor Kornel Gerstner in managing the students. “Students have enjoyed the challenge of writing, acting, and composing for radio as it is a very specific style.”

Senior Jordan Jarrett appreciated the experience of being on the writing team.

“Writing in a dialogue-only style proved to be difficult, but studying journalism set in me a finely tuned sense of what’s essential in any kind of writing,” Jarrett said. She hopes the story will resonate with a young adult audience. “Ultimately, ‘The Encounter’ is just that — a story about an encounter with truth and the willing and striving pursuit of it thereafter.”

Seniors Bryan Bulebush and Amanda Ward, along with junior Hannah Glavin, lent their voices for the main characters.

“What interested me most about my character, Violet, was her fire,” Glavin said. “She’s written with such a desire to know the truth and is willing to break all the rules just to discover it.”

While Violet, of the Peak of Defiance, is independent, creative, and curious, with a disposition that questions authority, Roy, of the Peak of Reliance, is a natural leader who thrives in a rigid culture and aspires to be an elder.

Bulebush, who plays Roy, said there are many similarities between himself and the character.

“We share that rather legalistic persona,” he said. “Above all, Roy just wants to do the right thing, even though his attitude and large persona get in the way sometimes.”

The show is slated for four seasons and a two-episode prequel. Season Two is being edited this semester while recording for Season Three and writing for Season Four take place. Season One will re-air over the summer before the prequel and second season debut in the fall.

Visit Liberty.edu/TheLight to stream the live broadcasts and connect with the program on Facebook @TheEncounterLU. Podcasts will be available on iTunes as they air.