Two national high school records were set on Friday’s first day of the Virginia Showcase presented by MileStat.com, the first meet held at the new Liberty University Indoor Track Complex. Lake Braddock (Va.) High School’s distance medley relay team set a new national standard of 11 minutes, 34.54 seconds in the event that starts with a 400-meter run and is followed by 800-, 1,200-, and 1,600-meter legs. That relay was anchored by senior Kate Murphy. Later that night, Tyrese Cooper, a sophomore from Florida, edged the 300-meter national indoor record by 0.02 seconds, winning in 33:05.

The Virginia Showcase, presented by MileStat.com, concludes Saturday and features elite sprinters, hurdlers, distance runners, jumpers, and throwers from up and down the East Coast and across the United States. More than 100 All-American athletes and three who qualified for last summer’s United States Olympic Trials make it one of the most highly anticipated high school competitions in the nation. There are even international athletes, including a team from Jamaica running indoors for the first time. The meet is being webcast live on flotrack.com.

The high school students were the first to set foot on the six-lane, 200-meter hydraulically banked track, sealed with a surface created by Beynon, one of the world’s leading track manufacturers. (The company also resurfaced Liberty’s outdoor Matthes-Hopkins Track Complex and the University of Oregon’s Hayward Field, site of the U.S. Olympic Trials in July.)

Liberty track & field Head Coach Brant Tolsma, who is helping to manage this weekend’s event, considers the new track complex a field of dreams not only for Liberty athletes but for the many outside groups who will use the facility.

“If you would have asked me when I came here, ‘In your dreams, what would you like the track & field facilities to look like in 30 years?’ I never would have envisioned this,” Tolsma said, noting the program has grown by leaps and bounds since he first started coaching the Flames in 1986.

A grand opening ceremony for the facility is set for Jan. 28 at 10:30 a.m., prior to the 11 a.m. start of the running events in the Darius Dixon Memorial Invitational, where Liberty’s teams will challenge athletes from more than 20 other colleges and universities. The ceremony will include appearances by Liberty President Jerry Falwell, Director of Athletics Ian McCaw, and Tolsma.

The Flames and Lady Flames will actually compete in the new arena for the first time next Friday and Saturday, when they host the Liberty Kickoff, another collegiate meet.

It is among only a few indoor tracks in the nation large enough to have a second-floor mezzanine area — a spacious loft where competitors can sit or huddle with their teammates and interact with athletes from other schools — above an eight-lane, 100-meter warm-up track straightaway. The mezzanine is on the opposite side of the track from stands that seat nearly 1,500 fans, with the capacity to hold more than 2,500 when track-level portable bleachers are added. The complex is large enough for a maximum occupancy of 5,000, including more than 3,000 athletes.

Liberty is slated to host the Big South Indoor Track & Field Championships starting in 2018, and Tolsma said other groups have been lining up to request use of the facility. This year, it will host the Central Intercollegiate Athletic Association Championships (Feb. 12-13) and the Virginia Commonwealth Games. The facility will also be used for the 2019 State Games of America.

“The future looks bright, and I’m glad we have the experience we do with managing meets because we will need to continue putting out a top-of-the-line product,” said Tolsma, who expects to see records broken at all levels in the facility, from youth to high school, college, and beyond. 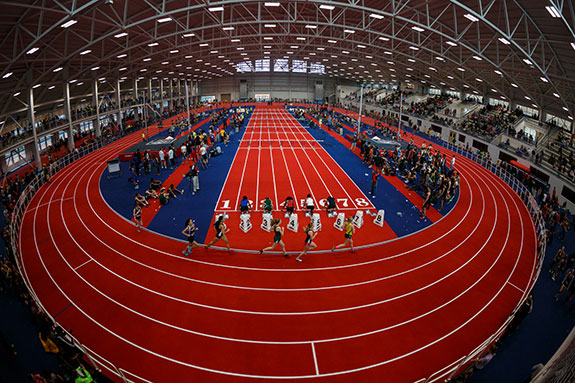