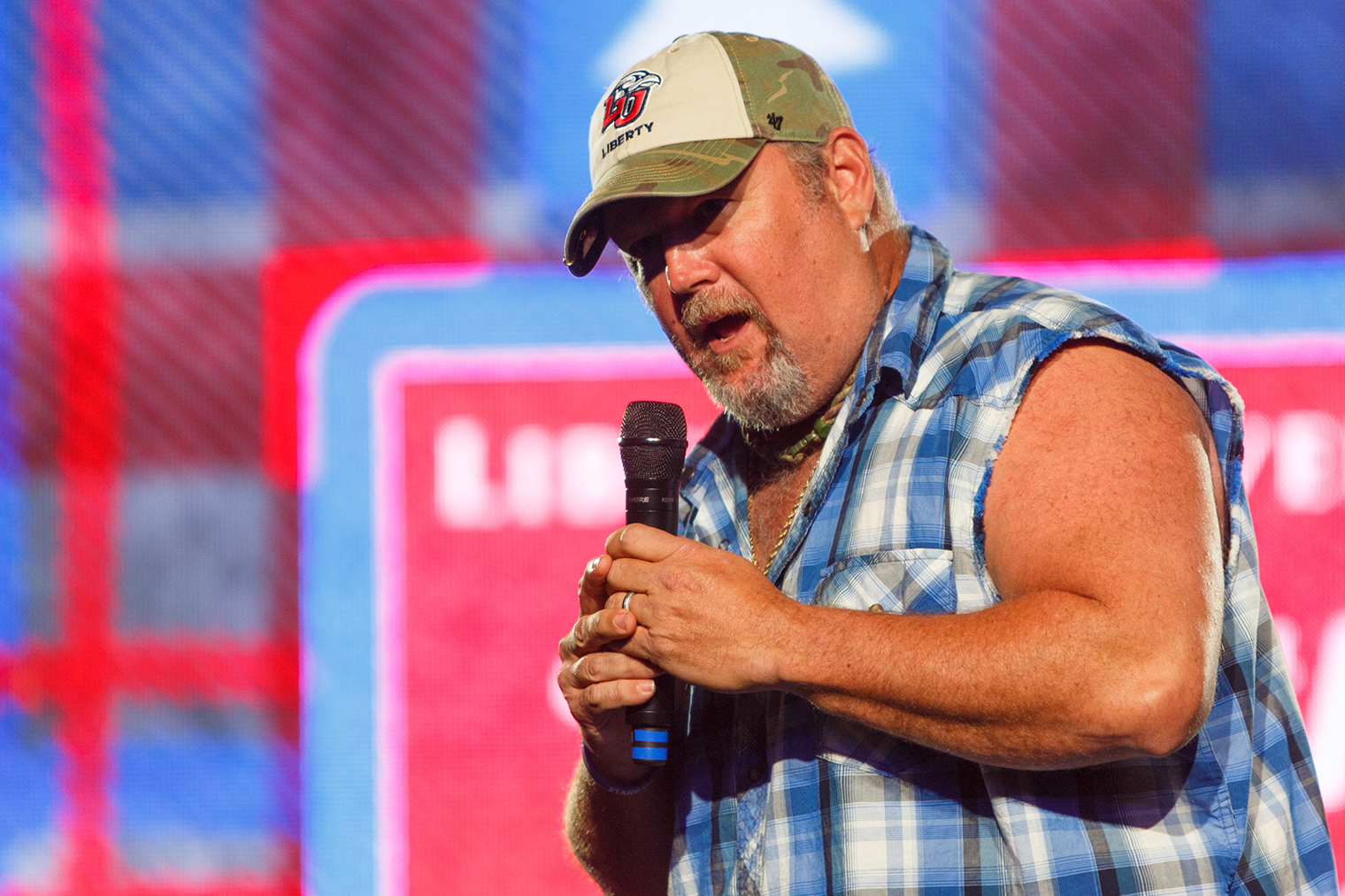 Dan Whitney, better known as his comic personality Larry the Cable Guy, joined Liberty University in Convocation on Friday for a Veterans Day celebration filled with laughs and patriotic joy.

The Convocation, part of Military Emphasis Week at Liberty, focused on honoring service members and veterans and concluded with an offering to assist a number of military supportive charities.

The Liberty University Army ROTC Color Guard began the service with the posting of colors. Dr. Mark Tinsley, associate dean for the College of General Studies, led the crowd — swollen with an extra 3,000 College For A Weekend visitors — in the Pledge of Allegiance. Then, “The Star-Spangled Banner” thundered across the Vines Center as the university’s premiere ministry team, the Sounds of Liberty, sang the national anthem. 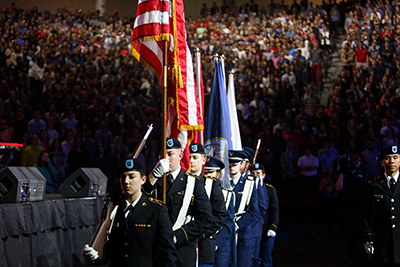 Dr. Steven Keith (Chap. Col. USAF Ret.), director of Liberty’s Center for Chaplaincy in the Rawlings School of Divinity, recognized those in the crowd who are serving in the armed forces, as well as the over 30,000 military service members studying around with world through Liberty’s online education programs.

Whitney took the stage to perform a brief comedy set, dressed in his signature Larry the Cable Guy style — complete with a camo LU cap topping the look.

Then he did something he had never done before at any venue — shed his stage persona as Larry and talked, in his own voice, about his personal life. He answered questions in a roundtable format with David Nasser, Liberty’s senior vice president for Spiritual Development, and Christian recording artist Charles Billingsley. 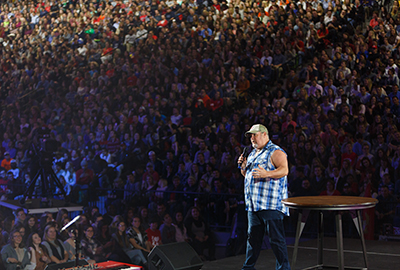 Whitney discussed his upbringing on a pig farm in Nebraska as a preacher’s son and the years of hard work he put into his comedy career before it took off.

“I became a Christian when I was a kid,” Whitney said in his natural Midwestern accent. “And then, like a lot of preacher’s kids … you just fall by the wayside. And you know, He’s always there; God has never left me, He’s always been with me, all the time. But then you get in the entertainment business … it just pulls you in.”

After falling in “the depths of that garbage,” Whitney said he rededicated his life to Christ two years ago.

Through tears, he said that while he is proud of his career, he does have regrets, including some offensive bits in his past acts.

He encouraged the crowd to find their joy in Jesus rather than worldly pursuits. 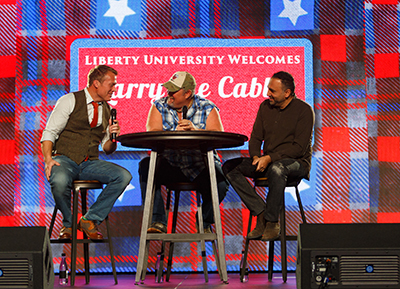 Whitney also discussed the work of the Git-R-Done Foundation, which he started as a platform of his celebrity in order to help others, including children with health issues and veterans.

“If it wasn’t for veterans, we would not be in the situations we are in today. They get taken for granted,” he said. “The soldiers are the true heroes. It is a shame how this country treats our soldiers. … It is just such an awesome thing to be able to (support them).”

Nasser presented Whitney with a red Flames Football jersey as well as a camouflage golf bag and antique rifle.

Billingsley then performed an a cappella rendition of “God Bless America,” a closing salute to the American heroes.

Military Emphasis Week concludes Saturday with Liberty’s last home football game. It will be preceded by a special military tailgate outside of the Hancock Welcome Center, hosted by the Office of Military Affairs. At 3:30, the Flames Football showdown begins with Big South Conference (BSC) Championship implications and a guaranteed FCS playoff spot on the line for Liberty as it hosts BSC rival Charleston Southern. Halftime of the game will feature a patriotic tribute, complete with fireworks, to those who served or are serving in America’s military. Visit Liberty.edu/MEW for the Military Emphasis Week schedule.