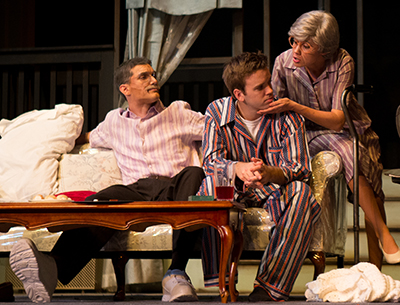 Family antics are the staple in the Liberty University Department of Theatre Arts’ upcoming production, “Over the River and Through the Woods,” opening tonight at Tower Theater. The heartwarming show will run for eight performances, ending Nov. 6.

The play centers on a tight-knit Italian family who scheme to keep one grandson, Nick, from moving away after he receives a job promotion.

“It’s a bit like a sitcom,” said Associate Professor of Theatre Arts Christopher Nelson, the play’s director. “It’s a comedy revolving around family, food, and faith.”

“Over the River and Through the Woods” brings a simple charm to the stage, with an uplifting message and laughs at every turn. A cast of six, including five faces new to the Tower Theater stage, perform roles that will remind audiences of their own family members.

Freshman Stefania Smith plays the part of Emma, Nick’s grandmother. She found the acting opportunity to be a new challenge.

“Playing a character who is in a later stage of their life makes me realize how precious our time on earth is,” she said. “One of the struggles for my character, and for the other grandparents, is coming to terms with our family moving away. To my character, happiness is simply everyone being together.”

After each performance, representatives from Operation Christmas Child (OCC) will be in the lobby to collect financial donations and share ways in which people can partner with them in helping needy children around the world. Theatre students plan to fill 130 shoeboxes for OCC with gifts, hygiene items, and school supplies that will be distributed to needy children all over the world. The Department of Theatre Arts is hoping that audience members will provide enough donations to fund the shipping costs for the boxes as well as support 15 young people in “The Greatest Journey,” OCC’s discipleship follow-up program.

This show is recommended for children 12 years or older.