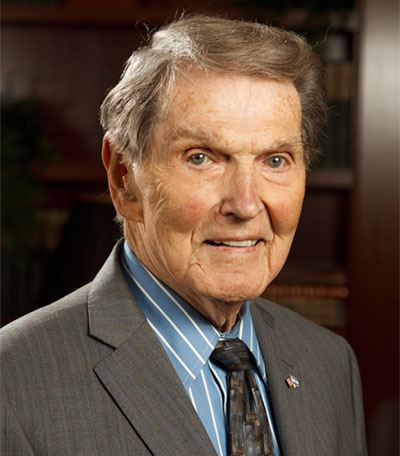 Dr. Tim LaHaye, a longtime supporter and former Board of Trustees member of Liberty University, died early this morning, just days after suffering a stroke, according to an announcement on the Tim LaHaye Ministries website. He was 90 years old.

A noted evangelical leader and pastor, he was most known for his international best-selling book series “Left Behind,” which he co-wrote with fellow author Jerry B. Jenkins.

LaHaye and his wife, Beverly, have been friends of Liberty since its early years. They have served together on Liberty’s Board of Trustees and are the namesake for two major campus facilities for which they generously provided funds: the LaHaye Ice Center and the LaHaye Recreation and Fitness Center.

“Drs. Tim and Beverly LaHaye have left a legacy at Liberty University,” said President Jerry Falwell. “They supported our growth over the years, and we would not be where we are today without their prayers, friendship, leadership, and generosity. Tim LaHaye always shared his biblical wisdom and encouragement with our administration, our faculty and staff, and our students whenever he visited campus. We have considered them members of our Liberty family since the beginning. Tim will be missed greatly, and we express our deepest sympathy to the LaHaye family.”

Drs. Tim and Beverly LaHaye are both noted authors, counselors, and television commentators. Dr. Tim LaHaye was also a minister, a nationally recognized speaker on Bible prophecy, the founder and president of Tim LaHaye Ministries, and the co-founder of the Pre-Trib Research Center.