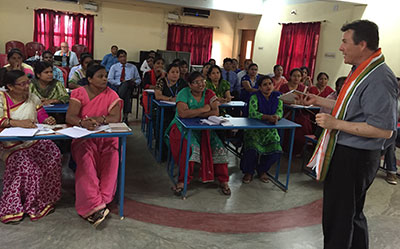 Smith taught at two Carmel English Schools locations. Though the school system offers K-12 Christian education, Smith said there are so few qualified Christian teachers in India that most of the Carmel faculty are Hindu, Muslim, and Buddhist.

“The Hindu, Muslim, and Buddhist teachers were very receptive to the training," he said. "They asked questions to gain clarification and were very participatory throughout.” He said the few Christian teachers in the class learned to gain confidence in blending their faith into their work.

“The highlight of this trip was to see both faculty members and school administrators strengthen their determination to implement biblical truth into their classroom instruction,” he said.

Smith first learned of the opportunity through Leadership Development International (LDI), an organization that visits colleges across the U.S. each semester to recruit teacher candidates to work in schools primarily in China but also in the United Arab Emirates. LDI arranged the teacher training program for Carmel English Schools, which has more than 3,000 students on five campuses in India.

This was Smith’s first trip to India. Prior to coming to Liberty in 2006, he taught at Belhaven University and Mid-America Christian University. He also served in both public and private K-12 schools and was an administrator of schools in Texas and Florida.