Leadership from Liberty University’s Criminal Justice Club (CJUS) presented four GoPro body cameras and mounts to the K-9 Unit from Lynchburg Police Department (LPD) on Wednesday as a way to give back to the community. Criminal justice is a degree program within the Helms School of Government.

“We just wanted to express our gratitude to the Lynchburg Police Department,” said Katie Godwin, president of Liberty’s CJUS club, which has over 150 members. “They have jumped over mountains and hills to help us out. This is just a small token of our appreciation to them.”

When the club inquired about ways that they could help the K-9 Unit specifically, they learned that the department was planning to begin using body cameras.

“We are humbled by the students,” said Sgt. Brian Smith, who oversees the K-9 Unit. “This is an opportunity to see what capabilities we have with this in training, and we are excited about it. Officers wearing body cameras is certainly a trend of the future.”

About a dozen students brought the equipment — with a price tag of approximately $1,100 — to the station in downtown Lynchburg and were greeted by five men in blue as well as excited yelps from Toro, a black German shepherd. Toro is one of three active canine officers in the unit, with another spot open after one was recently retired from service. 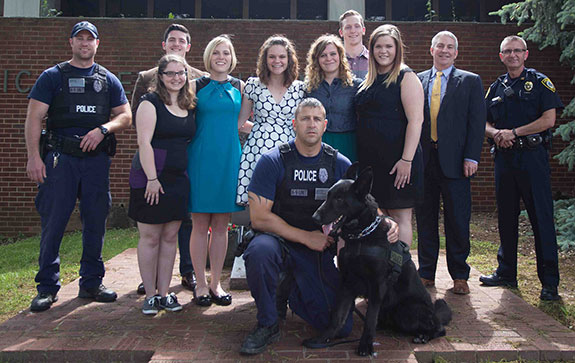 CJUS had been saving funds for several years, Godwin explained, planning to use them to impact the area in some way.

“When you come to college, you want to make an impact on the campus, but you don’t always think about the surrounding city,” she said. “We decided we also wanted to leave a legacy in Lynchburg by helping their police department become bigger and better.”

It was especially important to students like Godwin, who has developed a relationship with LPD through CJUS since she was a freshman; she is graduating on Saturday and wanted to present a gift before the end of the school year.

“It is almost like they have watched me grow up,” Godwin said of the local police force. Over the years, LPD has been a tremendous help to the club, speaking and giving them opportunities for training exercises.

“A lot of these students coming through are getting involved,” Smith said. “We have a great relationship … we do a lot back and forth. We have had them come out and help us with training scenarios. Building that relationship has been great.”

Godwin’s experience while in school has led to a job opportunity after graduation with the Chesterfield County (Va.) Police Department.

“These men and women in blue have so much going on,” she said, “but they are willing to come out on their personal time and teach us how to be better law enforcement officials. They are just willing to help us succeed in every way possible.”