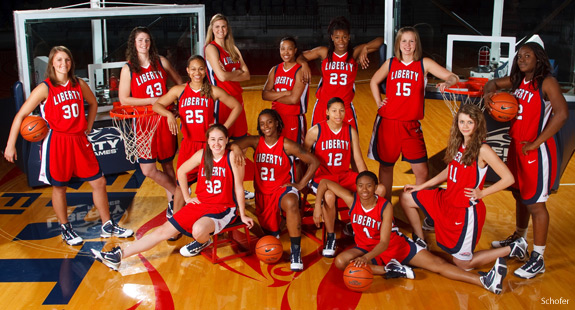 *UPDATE: After a decisive 82-58 victory over Israel’s Under-20 National Team, the Lady Flames basketball team was named the tournament champion of the 2010 Friendship Games in Eilat, Israel. The Flames won all five of their games at the tournament by an average of 40.2 points per game. For more on the Lady Flames’ victory, go to www.libertyflames.com.

Liberty University’s women’s basketball team is stepping away from its home court this summer in search of some good international competition and spiritual renewal. The Lady Flames traveled to Israel on May 29 to compete in the Friendship Games and tour many biblically significant locations.

“It’s a dream tour for a Christian student-athlete,” head coach Carey Green said. “We could not get a better combination of history and competition.”

The 14-day adventure is taking the team to areas such as Gethsemane, the Dead Sea, Jerusalem and the Mount of Olives.

“I’m excited about the whole experience of being where Jesus walked and experiencing the culture,” said Kittery Maine, a junior and forward on the team.

Several members of the team are planning to be baptized in the Jordan River.

After seven days of sightseeing and travel, the Flames fly to Eilat, Israel, to compete in the Friendship Games against teams from Israel, Jordan, Germany and other countries.

“Our success at the tournament will be based on which team sets the tempo for the game,” Green said. “Our three greatest assets are our speed, strength and agility. We’ve got two fantastic strength coaches who helped prepare us, Bill Gillespie and Dave Williams.”

Ten days prior to their departure, team members bonded through practice sessions, lifting, basketball drills and recreational activities, such as paintball and rock climbing. The women also spent time in team devotionals and individually researched the different sites they would be visiting.

“I see God already working in their lives,” Green said. “I really believe this will be one of those memories that they never forget.”

The last time the team traveled outside the U.S. was in 2006 when the Flames competed in the Caribbean Classic in Cancun, Mexico.