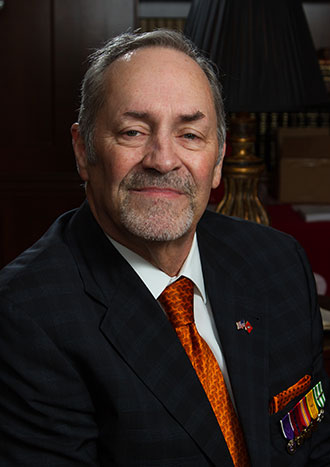 Liberty University’s 2016 Baccalaureate Service will feature a message from evangelist Tim Lee, a veteran Marine and recipient of the Purple Heart. The service begins at 6 p.m. on Friday, May 13, inside Liberty’s Vines Center in Lynchburg, Va.

President Jerry Falwell told the Liberty Champion, the university’s student-run newspaper, that Lee was selected due to “his sacrifice for this nation and the freedoms we all enjoy every day, and because of Tim’s determination to continue to preach the Gospel and never quit in the face of adversity.”

“Tim has been a loyal friend to Liberty University and to the Falwell family for many years and we are honored by his dedication to Liberty since he joined the Board of Trustees in 1994,” Falwell said.

Lee joined the Marine Corps in 1969 and, in March of 1971, he lost both of his legs in a land mine explosion in Quang Nam Province, Vietnam.

After returning home, Lee made the critical decision to use his platform to speak out about his faith in God. He served for five years as a pastor in Southern Illinois before transitioning to full-time ministry as an evangelist in 1979.

Today, Lee is the president of Tim Lee Ministries based out of Garland, Texas. He speaks in a variety of venues — from patriotic rallies to radio and television. At the request of President Reagan, Lee served on the Bicentennial Committee for the 200th anniversary of the U.S. Constitution. He has been honored by the United States Marine Corps, The Department of the Army, The Department of the Navy, numerous state legislatures, and cities of all sizes. He has received scores of other awards and recognitions over the past four decades.

Lee serves as the co-chair of the national committee of Veterans For Cruz. He serves on the Liberty University Board of Trustees as well as on the Trinity Baptist College Board of Directors in Jacksonville, Fla. Lee, a regular guest speaker at Liberty, most recently spoke at the university for Convocation during Military Emphasis Week last November. In 2012, Liberty awarded Lee the George Rogers Champion of Freedom Award, given annually to a veteran who has displayed extraordinary heroism while serving.

Tim Lee has been married to his wife, Connie, for 44 years. They live in Rowlett, Texas, and have three children and six grandchildren.

The Baccalaureate is a longstanding tradition at Liberty, demonstrating the university’s commitment to the Great Commission and the Great Commandment.