Pat Williams, senior vice president of the NBA’s Orlando Magic, told students in Friday’s Convocation that they are not at Liberty University to simply earn a degree, but they are preparing for a “life of leadership.”

“Everything rises and falls on leadership,” Williams said. “It always has, and it always will.”

As one of America’s top motivational, inspirational, and humorous speakers, Williams addresses thousands of executives and individuals from a number of organizations, including Fortune 500 companies, national associations, universities, and nonprofits.

Williams began by telling students that vision is one of the most important qualities in a leader. Without vision, he reminded the crowd, Liberty’s founder, Dr. Jerry Falwell, would not have been able to build Liberty into the university that it is today. He also named other great leaders, including George Washington, Abraham Lincoln, and Martin Luther King Jr., and said vision was a driving force in their successes.

Williams also pointed out that leaders must be lifelong learners.

“When you graduate from Liberty, probably within the week your résumé will be outdated because the world is changing,” he said. “If you are not learning every day, you are going to be flunking out of the parade called life.”

Anybody can commit to personal learning, he said, but surrounding oneself with wise people increases the well of knowledge from which they can draw.

“Hang with really smart people,” he said. “Have mentors and coaches. You need a good team.”

He added that since “we do not have enough time to make mistakes in the world,” it is important to have those good influences.

As he concluded, Williams pointed to the model of Jesus as the greatest recipe for success, which begins with having a “serving heart mentality.”

“If you want to be great and live your life to your full potential, then start serving others.” 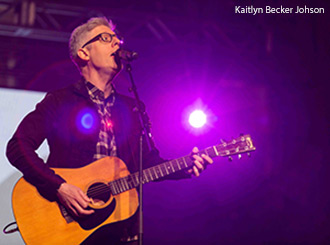 Before Williams took the Convocation stage, Grammy-nominated recording artist Matt Maher led students in singing a few of his well-known songs, including “Lord, I Need You” and “Your Grace is Enough.” Maher will be performing a concert Friday night in the LaHaye Event Space at 8 p.m.