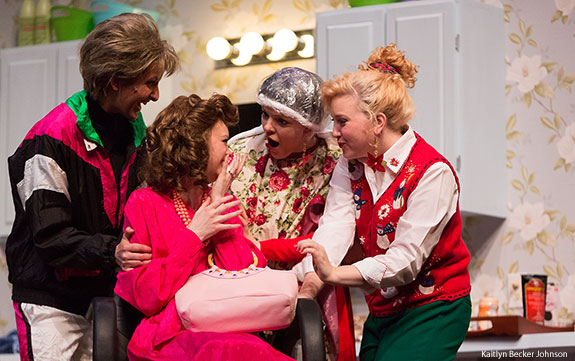 Set in Louisiana in the 1980s, “Steel Magnolias’” tells the story of the bond between six women who share their secrets, fears, and love for one another while engaging in neighborly gossip at Truvy’s Beauty Salon. Through various life events, including weddings, divorces, babies, and funerals the friends grow closer and stronger.

The lead actresses in the show include senior Kelsey Reichard, junior Kim Camacho, junior Catheryn Hooper, sophomore Rebecca Hibma, sophomore Amanda Ward, and senior Heather Reed. In addition to the strong bond they share on stage, the students are all friends off stage. Three of them are roommates.

The chemistry of these actresses brings to life a script filled with hilarious Southern repartee.

“The dialogue and situations reveal characters that are full of love and humor, and wonderful company,” said “Steel Magnolias” director Scott Hayes, who is also associate dean of the School of Communication & Creative Arts.

The set of Truvy’s Beauty Salon is unique in that it is entirely functional. It includes stylist chairs, a shampoo station with running water, functioning sit-down dryer stations, and a manicure station.

Hayes said the show was selected in part to celebrate Women’s History Month and added that even though the show celebrates women and their relationships, it is not just for them.

“It is a story of deep friendship, humor, love, and compassion, and everyone will be able to see themselves and the women they love in the characters portrayed,” Hayes said.  “The characters in the play remind me of the women in my personal life — made in the image of God and priceless.”

“Steel Magnolias” runs March 25- April 3 with eight performances. Showtimes and tickets are available through the Tower Theater website or by calling the Liberty Ticket Office at (434) 582-7328.