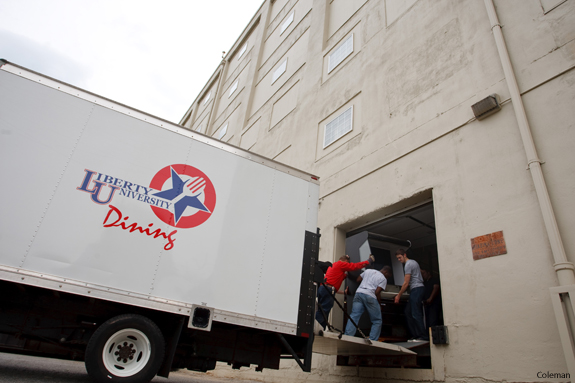 Liberty University, in partnership with Gleaning for the World and Liberty Dining Services, sent a truckload of commercial kitchen equipment Wednesday to a private school in Nashville, after floodwaters rolled over parts of the city on May 3, afflicting millions of dollars in damage.

Chuck Faulkinberry, resident district manager for Liberty Dining Services, which is operated by Sodexo, heard about DCA’s hardships from another district manager for Sodexo, Brad McNealey. While DCA did have insurance to cover much of the damage, it did not cover the $120,000 worth of kitchen equipment that was destroyed.

“I was stationed in the Deep South — from Florida to Louisiana — about five years ago, back when we were having all of those hurricanes,” said Faulkinberry. “So I was always the one in need and Brad would help me out. I called him after the flood, and he said he has three schools in desperate need, the first one being Donelson Christian. They’d been praying for any help they could get.”

Faulkinberry remembered several pieces of equipment that Liberty had in storage and, after gaining approval from the administration, offered to donate anything that could fit on a truck.

As staff filled the delivery truck at Liberty’s 12th Street warehouse on Wednesday, Faulkinberry remarked at how if they had waited much longer, the equipment would have been sold. A large display refrigerator had been stuck with a Post It note reading “eBay.”

“Someone was looking out for us,” said Faulkinberry, looking up at the ceiling.

After the truck had been loaded, Faulkinberry thanked the warehouse staff for the blessing they were a part of. “This will go a long way in helping them out.”

Commercial kitchen appliances stored at Liberty University's warehouse on 12th Street in Lynchburg were donated to a school in Nashville, Tenn., that was destroyed in recent floods.