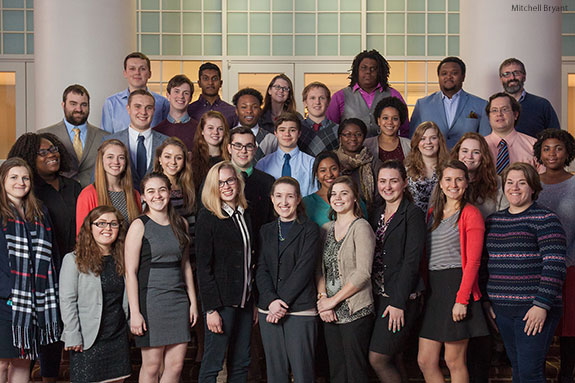 “We could not be more proud of the Debate Team for winning so consistently over so many years,” Liberty University President Jerry Falwell said.

Currently, Liberty sits atop the CEDA rankings, and is in close contention with No. 1 George Mason University in both the ADA and NDT rankings.

“It has taken more than six months of research, travel, and long practice sessions to reach this position,” said Michael Hall, director of debate. “We never want to take for granted the opportunity to compete for national championships. I’m excited to see what this team can accomplish at our final three tournaments.”

In the NDT, Liberty has qualified two varsity tandems — seniors Vida Chiri and Timothy Byram, and seniors Leonora Crane and Kaitlyn Schiess — for the seventh consecutive season, a feat matched only by Harvard University, Emory University, the University of Michigan, Michigan State University, Northwestern University, and Wake Forest University. Chiri and Byram’s performances in early tournaments have earned them a first-round bid in the NDT tournament, allowing them to bypass the usual qualification process; this is the second time in program history that Liberty has achieved such a bid. NDT nationals begin March 31 at Binghamton University, after the ADA National Tournament on March 10 at Boston College and the CEDA National Tournament at Binghamton University on March 25.

Byram and Chiri began the spring slate by finishing third out of more than 90 teams at the University of California-Berkeley Tournament in January, notching wins over Baylor University, Kansas University, and Berkeley along the way. This was followed by a Jan. 23 victory at the elite, invitation-only University of Pittsburgh Round Robin, where the pair bested Wake Forest, Baylor, Pittsburgh, and Rutgers University to claim the championship.

In February, Byram and Chiri finished third out of more than 120 teams at a tournament hosted by the University of Texas, falling to eventual champion Wake Forest in the semifinals after defeating teams from the University of Georgia, Northwestern, Texas, and Berkeley.

Crane and Schiess, who competed at Oxford University last fall, qualified for the NDT after taking third place at a qualifying tournament at the University of Mary Washington.

Liberty’s junior varsity team of Amanda Dabney and Moriah Wierschem and the novice team of Brianna Culchuk and Brianna Thomas each advanced to the semifinals of a tournament held at West Virginia University last weekend, falling to James Madison University and the United States Military Academy, respectively. Over the weekend of Feb. 27-28, the novice team of Lucas Bishop and Jess Horning finished the preliminary rounds of a tournament at Binghamton seeded at No. 1 and advanced all the way to the finals before falling to the U.S. Military Academy.