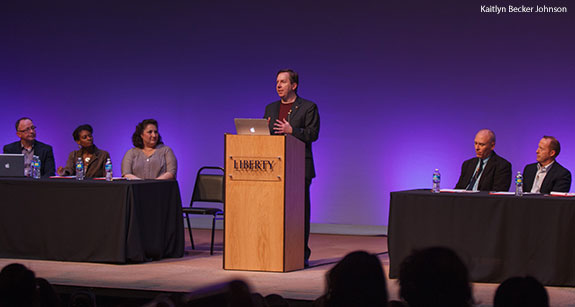 Broadway playwright Christopher Smith shares his story with Liberty University students during a Faith and Arts Symposium hosted by the School of Communication & Creative Arts on Nov. 17.

Christopher Smith, a Broadway playwright and composer, shared his journey to writing and producing an acclaimed musical on Tuesday night in Liberty University’s Tower Theater. The event, “Communicating Faith to a Skeptical World,” was the first Faith and Arts Symposium hosted by the School of Communication & Creative Arts (SCCA).

According to SCCA Dean Dr. Norman Mintle, the symposium was held to inspire and motivate students as they seek to share their faith through their art.

“Our School’s various disciplines are blessed with wonderfully creative and strategically placed Christians whose testimonies are enhanced by their professionalism,” Mintle said. “Chris Smith is a perfect example. His work on the Broadway musical ‘Amazing Grace’ is proof positive that Christians can truly impact our culture with wholesome, meaningful, and truth-filled entertainment that also glorifies God.”

Smith is one of only a few writers of his generation to have occupied the top position in all three writing disciplines of a Broadway show. His production, “Amazing Grace,” based on the life of John Newton, is the first Broadway musical to feature the spiritual redemption of a historical figure as its central plot. The Associated Press hailed the production as “inspirational, beautiful, emotional, and exhilarating.”

“The story he’s adapted from the historical narrative literally touched audiences in life-changing ways,” Mintle said. “His example provides an exciting standard to which our Theatre Arts students — along with all our SCCA student-artists — can aspire.”

Smith explained to the audience that before achieving success in his creative endeavors, he was a small town police officer. He described his struggles during the 18-year process of writing “Amazing Grace,” which Smith said was only possible because of prayer. Smith attributes the musical’s success solely to God.

According to Smith, writing is one of the biggest ways to impact culture. He encouraged students to persevere through their struggles and be true to their creative process, while keeping the audience in mind.

“In this sick, decaying culture we need people who still believe and are willing to go out and give a message of hope and inspiration to an unexpecting audience.”

After Smith shared his story, a panel comprised of Liberty faculty with professional experience in various creative disciplines, discussed the impact of “Amazing Grace” in regard to music, theme, storytelling, and more. Students were encouraged to join in the conversation, asking questions about the creative process, inspiration, research, and networking.