In front of a packed house at the Liberty University Vines Center on Wednesday, retired neurosurgeon Dr. Ben Carson, who is seeking the GOP presidential nod, painted a picture of a hopeful future to students at the world’s largest Christian university — but only if they stand united for the principles that made America great.

Recalling his previous visit to Convocation in 2012, Carson noted that he and his wife “talk about Liberty all the time because that is what it represents — liberty, freedom from the snares of the world and the right kind of teaching and the right kind of values for the young people who will become the leaders of our nation.

“And you are such a vital part of the future of this nation.”

Carson, the longtime head of pediatric neurosurgery at the Johns Hopkins Children’s Center, is one of the most prolific surgeons ever. He was the first doctor to successfully separate a pair of twins conjoined at the head, and received the nation’s highest civilian honor in 2008 when President George W. Bush presented him with the Presidential Medal of Freedom. He has also been selected by the Library of Congress as one of America’s living legends.

Carson is a New York Times best-selling author and leading advocate for intellectual and educational reform. Through the Carson Scholars Fund, which he founded in 1994, over 6,700 scholarships have been awarded nationwide (this includes five current Liberty students). The Ben Carson Reading Project has helped invest $1.2 million in establishing and maintaining reading rooms at schools across the country.

Now, having traded his white doctor’s coat for a dark blue suit, Carson is — though apprehensive at first — seeking to preserve American greatness through political action as its next president.

Though soft-spoken and unassuming as he approached center stage, Carson was energized by the crowd at one of the most heavily attended events ever hosted in the Vines Center — nearly 12,000 were in attendance. (Lines ran through the heart of campus ahead of the event and overflow crowds watched from satellite locations. The event also broke the streaming record for Liberty’s Online Communities, with over 5,500 people watching from 38 different countries.)

Carson quickly deflected the applause, turning attention to the heroes of America — its veterans — including longtime Liberty staff member and former WWII POW George Rogers. Falwell recognized Rogers, who was seated on the stage, earlier in the service, noting that he served at Liberty from 1974-99, most recently as its vice president for finance and administration. Rogers is the namesake for Liberty’s George Rogers Champion of Freedom Award, given annually to a veteran who has displayed extraordinary heroism while serving. It was a touching gesture for Veterans Day, visibly moving Rogers and other former service members in attendance.

After the thunderous show of support for veterans, Carson asked the crowd to consider what they would do to preserve freedom and prosperity for others, including future generations.

He described his own experience with the American dream, overcoming naysayers and extreme poverty to achieve his goal of becoming a doctor. According to Carson, his experience illustrates that “this is the most exceptional nation the world has ever known.”

But that status is being threatened, he said, as fiscal irresponsibility spreads unchecked and some seek to push God out of society and to mute intellectual debate.

“God has endowed us with these amazing brains, and we are made in the image of God,” he said. “I believe that the Constitution gives everybody the same rights, that it doesn’t give anybody extra rights. … And if we can begin to understand that … then I believe that we can make real progress, because that would mean that people, whether they believe the same or not, could actually sit down and engage in an intelligent conversation.”

He said civil discourse is the key to success in a pluralistic society, as is compassion for one another and thinking about the future. According to Carson, the founding fathers intended a well-informed and educated populous to keep the government in check.

“If the people are not well informed, all it takes is unscrupulous politicians and news media and off the people go in completely wrong directions, listening to all kinds of propaganda and then inculcating that into their method of thinking.”

So Carson charged the audience to be vigilant, not silenced by fear but emboldened by their faith.

“This nation is an incredibly special place,” he said, “because when you look at our founding document, the Declaration of Independence, it talks about ‘special, unalienable rights, given to us by our Creator,’ also known as God.

“We have so many people now who are trying to push God out of our lives … but let me tell you, our nation’s survival as the pinnacle nation in the world, I believe, is rooted in our value system — the values and principles that made us into a great nation. The real question is, ‘Are we willing to stand up for those values and principles or will we allow ourselves to be intimidated?’

“The secret to the prosperity of this nation is we must be willing to stand up for what we believe in.”

Carson talked about governing in a society where people hold different moral values and his plans to fix the economy.

When asked to share some advice with students, Carson turned their attention to Scripture, particularly Proverbs 3:5-6, which he said has encouraged him through adversity.

As he wrapped up, Carson called for the people to find common ground and not give in to the narrative that tells them people are at war over age, gender, economical, racial, ideological, political, or religious lines. 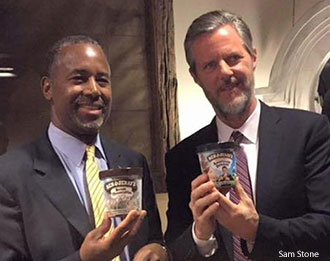 Following Convocation, Carson met with students, including the Carson scholars and representatives from Liberty’s Student Government Association, in a reception presented by him and Falwell that was cleverly titled “Ice Cream with Ben and Jerry.”

Thompson said that Carson related well to the student body as he spoke in Convocation, relaying some of his background, including being raised in a single-parent household and struggles in school.

“It really resonated with a lot of the students,” Thompson said. “It gave us a lot of hope now (considering) he is the front-runner in the race.

“I think students were very receptive to what he had to say.”

Later in the day Carson visited the Liberty University College of Osteopathic Medicine (LUCOM), touring the Center for Medical and Health Sciences and shaking hands with some of Liberty’s student doctors. Carson had recognized the medical students earlier in Convocation, as they filled much of the front seating section.

During a press conference at LUCOM, Carson talked about the medical profession, directing his response to the student doctors.

“There are few careers that are more rewarding than this,” he said, “Because you get to intervene in the most important thing a person has — their life — and give them longevity and give them quality. I have opportunity to do that hundreds and even thousands of times and I wouldn’t trade one of those lives for a billion dollars.”