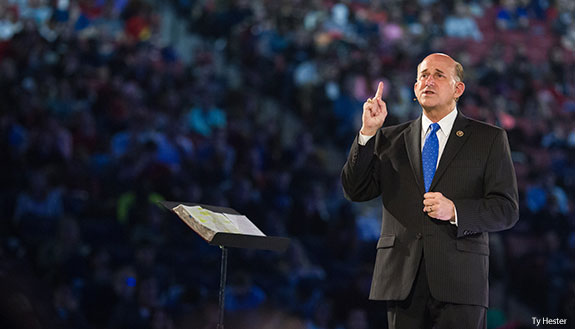 A tireless fighter in the United States House of Representatives, Congressman Louie Gohmert (R-Texas) shared what drives him during Friday’s Convocation at Liberty University — standing for God’s truth.

David Nasser, Liberty’s senior vice president for spiritual development, introduced the sixth-term representative from Texas’ first district as a fearless, modern-day leader who does not simply point out problems, but offers solutions as well.

Gohmert was recently awarded the 2015 “Defender of the American Economy Award” by the U.S. Business and Industry Council.

In his speech, Gohmert said that often staying true to godly principles involves “playing the fool,” since many do not respect God’s wisdom. At the heart of his message to students was I Corinthians 1:18-25, which he read in part: “For the message of the cross is foolishness to those who are perishing, but to those of us who have been saved it is the power of God. … Has not God made foolish the wisdom of this world? … because the foolishness of God is wiser than men, and the weakness of God is stronger than men.”

The congressman challenged students to not be afraid to “play the fool,” because “there is a lot of freedom” in doing so.

To illustrate this, Gohmert shared stories from his own path to public service, as well as his experiences in Congress. He included how he infamously ran for Speaker of the House to challenge the leadership of his own party. Though the choice was unpopular, he said that he did what he had to in order to send a message that principles cannot be compromised.

Gohmert said that America’s decline from principle is greatly tied to society’s growing disdain for open debate. On that note, he commended Liberty for welcoming democratic candidate Bernie Sanders to speak in Convocation.

“Christians are not normally afraid of debate,” he said. “It seems like as people who claim to be liberal take over universities, there is no room for disagreement.”

But, Gohmert recognized, disagreement is vital to freedom.

“We need to have disagreement, unless there is one person here who has a 100 percent lock on God’s truth, otherwise we need to prayerfully consider and talk and hear different opinions. It is how we got our Constitution.”

Gohmert used the history lesson of America’s foundational document to show that even among the nation’s founding fathers, there was some discord. But, ultimately, through the course of debate and prayerful consideration, the Constitution was written.

“Some of those guys played the fool, and they were not afraid of doing it,” Gohmert said of the Founding Fathers. “And, as a result, we got the greatest, most blessed country (with) more freedoms, more opportunities.”

But today, Gohmert said, those freedoms are under attack, with governmental overreach challenging traditional marriage and religious expression, as well as threatening privacy.

“The only thing Orwell got wrong was the year. It wasn’t 1984,” he said, referring to the famous dystopian novel. “Big Brother is watching you.

“These are trying times, and it breaks my heart that you don’t have the freedoms right now that I did when I was growing up. It’s getting worse all the time.”

With that in mind, he urged students to not be afraid to stand up for truth, even if they come under fire by those close to them.

“We are in the Lord’s hand,” he assured the crowd. “When you have some of the days when your closest friends are so angry at you, there is one thing to do, that is grab ahold of God’s finger, and He will give you strength for the day.”

Gore shared some business wisdom from a Christian perspective with the students. She, noting that the family business took decades to break even, challenged conventional economic wisdom that says economics is the study of the utilization of scarce resources.

“God is abundant,” she said. “So … you look at the actual situation, and if you (do that), you can find uses for that situation.”

She also talked about the creativity and ingenuity that led to the success of Gore-Tex.

“When you are young and you are visioning and you are looking for opportunity, I think it can be providential,” she said to the students.

She told the crowd that success requires persistence and a commitment to retaining a culture — as her company strives to do even as it grows — that is founded on fundamental practices that promote creativity.