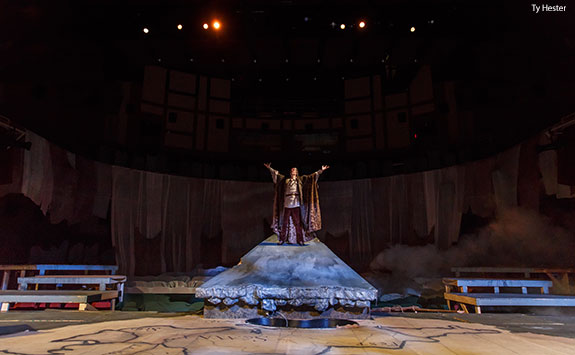 Audiences of Liberty University's King Lear will sit on the stage as actors utilize platforms built over portions of the auditorium seating, allowing the production to take advantage of both intimate proximity and expansive surroundings to better support the setting.

Liberty University’s Department of Theatre Arts will pull audiences into “King Lear,” the woeful tale of mortality, betrayal, madness, and the human condition, as it presents the great Shakespearean tragedy from a unique vantage point — the stage itself. “King Lear” opens Thursday and runs through May 23 and May 25-27 at Tower Theater, with performances at 7:30 p.m.

The show will bring the script to life in a new way with the audience watching from seats on the stage while the action takes place on platforms built over a portion of the auditorium’s seating. The raw tale is well suited for the flipped-around design, allowing performers to move from a close, intimate proximity with the audience, to further away, making great use of the expanse surrounding them. The design helps the minimalistic production grip its viewers and immerse them in its themes. In one scene, for example, a raging storm ensues as the protagonist descends into madness.

“We are trying to stretch the playing space,” said Andy Geffken, an assistant professor of theater arts who is directing and acting in the play. “This turns into something that, for the actors, is what it feels like to do outdoor drama.”

Taking a different approach to staging has been a tradition of Liberty’s Summer Shakespeare workshop. In the past two years, audiences followed as scenes transitioned from room to room in the Hancock Welcome Center and the Jerry Falwell Library.

“King Lear” features a cast of 14, comprised of three faculty, five alumni, and six students, as well as a 12-person crew.

Geffken said this summer workshop is a valuable experience for students.

“For anybody who is studying as an actor, when you have to deal with the heightened language in the verse and challenges of Shakespeare, it’s a worthwhile project,” Geffken said.

It is also a unique opportunity because students get to work alongside alumni and faculty while learning how to work on a fast-paced, two-week rehearsal schedule.

“King Lear,” considered to be one of Shakespeare’s greatest works, tells the story of an aging king as he comes to terms with waning authority and imminent death. As the king grapples with rivalry and betrayal within his family, and he discovers what life is like stripped of all once held dear, his sanity begins to deteriorate.

Geffken said he expects the heavy themes to cause viewers to ponder what truly matters in life, as well as the need for redemption.

“Shakespeare is meant to be heard and witnessed, not just read,” he said. “You have to bring the words to life; otherwise, it is just a lot of words, and they are hard to digest. I think the innovation and creativity we use in telling these stories has a lot to do with making the text more accessible. Innovation is what has made (Liberty’s Summer Shakespeare) unique to other Shakespeare productions.”