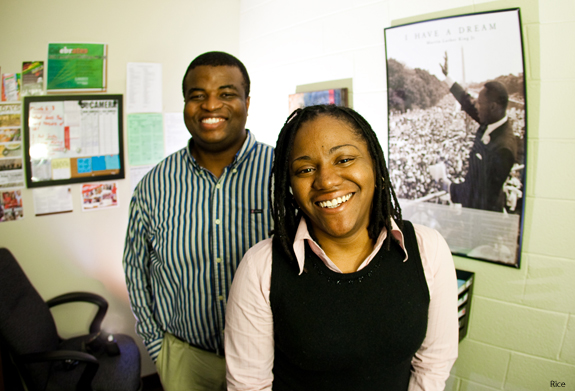 Adedamola Onafowokan and Daveta Saunders pose in front of a poster of Dr. Martin Luther King Jr. at Liberty's Center for Multicultural Enrichment. The Center is hosting a presentation on King's life on Thursday.

As Liberty University students head back to classes today at the start of Spring 2010 semester, many are also commemorating Martin Luther King Jr. Day.

Several members of the university community were invited to the 12th Annual Martin Luther King Jr. Birthday Breakfast held this morning at Virginia University of Lynchburg. The breakfast was sponsored by the Dr. Martin Luther King Jr. Center for Human Rights, Inc. The theme was “Stand Up and Be Counted,” recognizing the importance of participating in the 2010 U.S. Census.

Adedamola “Dammy” Onafowokan, a 2005 LU graduate and an administrative assistant with Liberty’s Center for Multicultural Enrichment (Center4Me), attended the breakfast along with other LU representatives. He said he wanted to take part in the day in a special way.

“It’s always an inspirational time, a time to remember the efforts of Dr. King and the change he was able to bring about in the fabric of this nation, which I’ve grown to love,” he said. This is the third year he has attended.

At Liberty, he said the Center4Me has tried every year to “bring some form of attention to the contributions of Dr. King and what his struggle meant.” On Thursday, the office is sponsoring “The Journey of Dr. Martin Luther King, Jr.,” a chance for people to learn more about the renowned preacher and civil rights leader through a presentation of pictures and video. The free event is open to the Liberty community and will take place at 7 p.m. in DeMoss Hall 1114. The event will lead into the Black History Month events the center is planning in February.

Onafowokan, who immigrated to the United States from Lagos, Nigeria, when he was 13, said he admires King for what he did “not only for the black community, but for all of us, all races to come together, equality for all.”

He said the America he was welcomed into would have been a lot different if he had come here earlier. He personally credits King for giving him “a soft landing” here.

Onafowokan said he is now proud to be a part of a university that observes special days like this one.

“I’m grateful to Liberty for working here and recognizing the achievements of him [King] and many other people.”

In April last year, Liberty students had the unique privilege to hear from King’s youngest daughter, Bernice King, during convocation. She spoke about her dual role as a representative of her father’s “King” legacy and also as a servant of the Lord — the ultimate King of Kings. To read a story about her visit, click here.