Liberty Women's Basketball rises to No. 14 in Mid-Major rankings 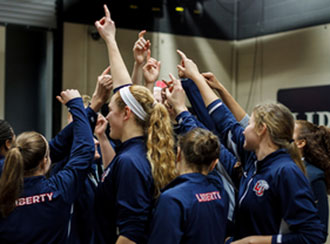 Fresh off wrapping up its 15th Big South regular-season title and the No. 1 seed for the 2015 VisitMyrtleBeach.com Big South Women's Basketball Championship, the Liberty women's basketball team has climbed to a season-best No. 14 in the most recent CollegeInsider.com Women's Mid-Major Top 25.

This past week, Liberty picked up road victories at Presbyterian, 63-41 on Saturday, and Longwood, coming from behind for a 65-60 triumph, to extend its winning streak to eight games and reach 20 victories for the eighth consecutive season.

The Lady Flames (20-6) are 16-1 in conference play and have tied the Big South record for most conference victories in a single season, with three games still remaining on the regular-season schedule. Liberty will host Charleston Southern on Senior Night this Saturday at 7 p.m., for its inaugural #WinLikeAnLUGirl event in the Vines Center before welcoming Winthrop on Tuesday at 7 p.m. for its annual Play 4Kay game for breast cancer awareness.