Winterfest guests will rock in 2015 with mix of music, activities 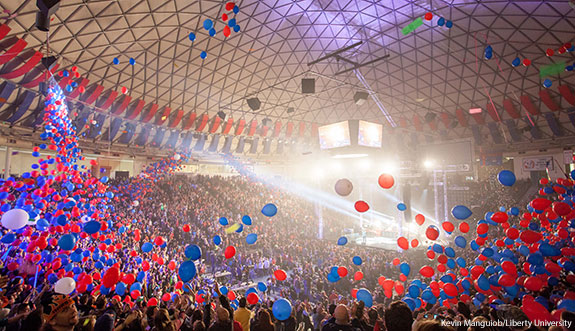 A dynamic lineup of some of the most well-known Christian artists and speakers promises to make Liberty University’s 13th annual Winterfest the place to ring in the New Year in Central Virginia. More than 7,500 people are expected to attend the two-day celebration, which takes place Dec. 30-31 and includes activities across Liberty’s campus in addition to the concerts in the Vines Center.

“We have such a wide range of people who will come and that’s because we have such a smorgasbord of artists coming, everybody from Lecrae to Skillet and the Newsboys,” said Mark Misiano, Liberty’s communications director for residential enrollment. “We’ve included so many different genres that pretty much anybody who’s interested in any sort of Christian music or Christian speaker has the opportunity to come and listen to some of the best in the business.”

Other artists include Rend Collective, for King & Country, and Kari Jobe, opening for Lecrae on Dec. 30, and Humble Tip and Jamie Grace on Dec. 31, setting the stage for Newsboys and Skillet, who will rock in the New Year.

While general admission and floor seats have sold out, partially-obstructed reserved seating concert-only and all-event tickets have just been made available online at half price.

The event schedule will also include Q&As with Kari Jobe, for King & Country, and Lecrae on Dec. 30 and Newsboys, Jamie Grace, and Skillet on Dec. 31, giving guests a chance to interact with band members and speakers.

“That might be what I’m looking forward to the most, the artist Q&As, because you can be up close and personal with the performers,” Misiano said.

John Luke Robertson of A&E’s “Duck Dynasty,” also a featured speaker for Winterfest, will be co-hosting the artist Q&A sessions on Dec. 31 with Liberty alumnus Jake Holland, who will host the Dec. 30 Q&As.

Two youth leader sessions are available to those who RSVP — the first on Dec. 30 led by actor and producer Kirk Cameron and a second on Dec. 31 with Dr. Richard Brown, Liberty’s youth ministries faculty director and a professor in its School of Religion.

Before the doors to the Vines Center open at 5:30 p.m. both nights, visitors can take guided tours of campus and take advantage of Liberty’s world-class recreational facilities. Winter sports enthusiasts can ski or snowboard at the Liberty Mountain Snowflex Centre or ice skate at the LaHaye Ice Center. Guests can also skateboard at the Liberty Mountain Skate Park, or check out the renovated and expanded LaHaye Student Union where they can scale a new 40-foot rock climbing wall, swim, or play basketball, volleyball, and indoor soccer.

Three-meal passes to the newly renovated Reber-Thomas Dining Hall are available for purchase, and there will be food vendors outside the Vines Center before the concerts start.

Winterfest will be streamed live on Liberty’s Online Communities website, accessible at www.Liberty.edu/Winterfest on the ‘Watch Live’ link under the information tab.

Online viewers will even have the ability to take part in the altar call each night, through a hotline.

“If people want to make decisions, or if there’s anything they need prayer for, they are welcome to participate,” Misiano said.

Anyone who applies to Liberty while at Winterfest will be entered into drawings for a guitar signed by the artists and a $16,500 scholarship. Those who take a picture with Liberty or Winterfest apparel and post it on Twitter or Instagram tagging #LUWinterfest will be eligible to win free tickets to next year’s event or a $50 I-Tunes gift card.

Prizes will be given away at the end of the night on New Year’s Eve, when next year’s major artist will be revealed.