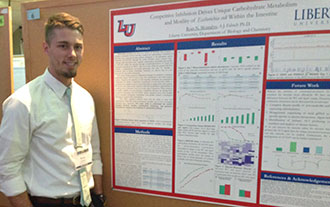 It was the first time Liberty had entered the competition, and Montalvo won with his presentation titled, “Competitive Inhibition Drives Unique Carbohydrate Metabolism and Motility of Escherichia Coli within the Intestine.”

Montalvo is a student of Dr. Andrew Fabich, associate professor of microbiology in Liberty’s Department of Biology & Chemistry. He graduated with a Biomedical Sciences (pre-med) degree last spring before switching his major to Molecular Biology in order to continue his studies under Fabich this fall.

“Ryan is just a fantastic student,” Fabich said. “He works so hard to understand his research that he doesn’t just get the facts, he knows how to communicate the ideas.”

“Ryan was able to combine an infectious disease study with genome sequencing and intestinal health all in one poster,” Fabich said. “That interdisciplinary approach is what judges found so attractive in the research that he did.”

Fabich received a Provost Research Grant of more than $8,000 to be used for metagenomic sequencing of the intestinal microbiota response to E. coli colonization.

“E. coli (bacteria) is the most-studied organism on the planet,” Fabich said. “The rules that you learn from studying E. coli can apply to any type of research, in the sense of genetic manipulations you do.”

Fabich said he applied for the provost grant so that students like Montalvo can share their research with the scientific community. At the Virginia Academy of Sciences Annual Meeting last May, Montalvo was awarded the best oral presentation in biology/microbiology. A week later, Fabich and Montalvo presented their research at the General Meeting for the American Society for Microbiology in Boston.

“He went by himself and won first place,” Fabich said of Montalvo. “That speaks volumes to the caliber of student Ryan is and the other students we have here. It is a strong reflection of the administration at Liberty University, that they see value in science and in supporting the sciences and are providing us with cutting-edge equipment for research purposes and in the classroom.”

Fabich asked Montalvo to present his research at the symposium because he views the University of Maryland as an important center for E. coli research.

“I was hoping to go and get some really good interactions,” he said. “To find out that Ryan won was extremely rewarding.”

He said it refutes the claim by Emmy Award-winning educator Bill Nye in last February’s “science vs. creation” debate with Ken Ham, held at the Creation Museum in Petersburg, Ky., and featuring an interview with Dr. Fabich.

“Bill Nye said creationists can’t be good scientists,” Fabich said. “We’re out there to share these ideas to demonstrate that we are doing sophisticated science that’s cutting-edge and without compromise. We just took our research to places Nye said we should go to communicate these ideas — competing against Ivy League schools and against other programs that have NCAA Division I athletics — and we won first place.”