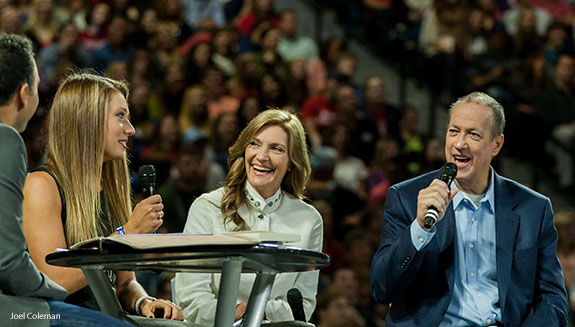 When Pro Football Hall of Fame quarterback Jim Kelly took the stage at Liberty University Convocation on Friday, he did so as more than a legendary football player, businessman, philanthropist, and cancer survivor. He joined Liberty as one of its own — as a parent. The university’s Vines Center was packed with students, many of whom were joined by family members to kick off the annual Fall Family Weekend.

As Convocation began with a time of worship and prayer, Kelly clasped hands tightly with his wife Jill, and daughter, Erin (a junior at Liberty) — a reminder of how close the family has clung to God and each other through the difficult seasons of their lives.

Before the Kellys shared their story in a panel moderated by David Nasser, senior vice president for Spiritual Development, the crowd was met with some surprises.

Smith said he knows Jim Kelly as more than a Buffalo Bills legend who led his team to four-straight Super Bowl appearances, but as a “living testament of what God can do for you in your life.”

Jim Kelly showcased some of his old form by tossing footballs — autographed by both Kelly and Smith — to the crowd.

Only months ago, Jim Kelly was battling cancer, but was declared cancer-free by doctors in September.

Before Jim’s battle with cancer, the Kellys’ son, Hunter, was diagnosed with Krabbe Disease shortly after his birth and was only expected to live a couple years. He died at 8-and-a-half years old in 2005.

The family shared how their faith in God was developed, and ultimately strengthened, through the seasons of hardships, beginning with Hunter’s diagnosis in 1997.

“Every day that we woke we did not know if our son was going to be there or not,” Jim Kelly said. “It was driving us crazy. … Then we decided, we were going to treat him like he was living.”

That decision helped them to make Hunter’s eight years meaningful and full of fond memories.

The family explained that before they were met with hardship, they were not a family of faith. When Hunter was diagnosed, Jill Kelly said she immediately thought that Jim’s status, talent, fame, and money could somehow fix their situation.

“The worldly foundation that I have stood on my entire life came crumbling down in an instant, and I praise God for that,” she explained. “Because if there was a worldly answer, if there was a cure or a treatment or something like that, in that moment that is what I would have continued to put my hope in.”

She said that while she selfishly came to God in that difficult time because she only wanted assurance that she would someday be with her son in Heaven, He accepted her with open arms. 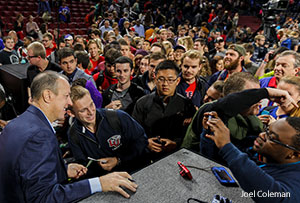 “He allowed me to chase after the things of this world that are absolutely empty, because at the end of all the emptiness that’s there, He is still there,” she said. “It took the suffering of our only son to bring us to the only suffering that matters and that is the suffering of God’s one and only son.”

Jim Kelly said it was his wife’s transformation by God’s grace that led him to find peace in Christ and is what gave him a foundation he would later need to endure treatments for cancer in his upper jaw.

He was so confident in God’s love that he told NBC last year that he was not afraid to die. That was something that resonated with Erin.

“I remember growing up, my dad always said to me, ‘You have to be Kelly Tough,’” Erin said, citing the family motto and the title of her upcoming book. “I didn’t understand the fullness of what that meant until I actually saw my earthly father be weak. It just drew me to seek the strength of my Heavenly Father.

“It allowed us (as a family) to look to God’s strength and say, ‘Lord, you are good even in the midst of this, you are good and you are taking care of every detail and we have nothing to fear because we know that in death we can have life.’”

Jim Kelly said that the opportunities God has given him to impact others through this journey have been just as much of a blessing to him.

The Kelly family wanted to encourage anyone in the crowd who is going through hardship or uncertainty. As Convocation ended, Jill Kelly asked anyone who wanted that support to stand and she prayed for them.

After Convocation, the Kellys interacted with students and signed copies of their books.

Later in the day, the Kellys visited the Liberty Flames Sports Network studio and filmed segments for upcoming episodes of Game On, LFSN’s daily sports talk show. Jim Kelly had the opportunity to talk football with the hosts. He then spent time interacting with the Flames Football team and its head coach, Turner Gill, a friend of Kelly’s.

The Kellys plan to enjoy Fall Family Weekend events together at Liberty this weekend.