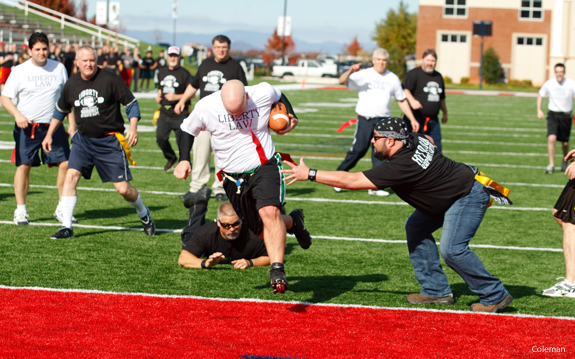 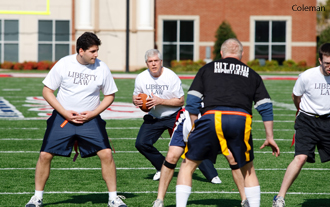 Students and faculty from Liberty University School of Law and Liberty Baptist Theological Seminary raised more than $1,500 for a local charity at the second annual Turkey Bowl held on Saturday, Nov. 14.

The law school beat LBTS 14-12 in the charity flag football game, which took place at Williams Stadium with about 400 fans. Monies raised from ticket sales and other donations were presented to the Liberty Godparent Home, a Christian organization founded by the late Dr. Jerry Falwell that is devoted to improving the quality of life for unwed pregnant teens, babies and adoptive families through the Liberty Godparent Maternity Home and Family Life Services Adoption Agency. The organization aims to empower young pregnant girls in crisis with the ability to realize the value of their life and the life of their unborn child, while bringing other families together through adoption.

Dean Mat Staver received the Turkey Bowl trophy on behalf of the law school. Last year, LBTS won and $700 was raised for the Godparent Home.

The football game was followed by a meal of chili dogs and chips enjoyed by faculty and students.