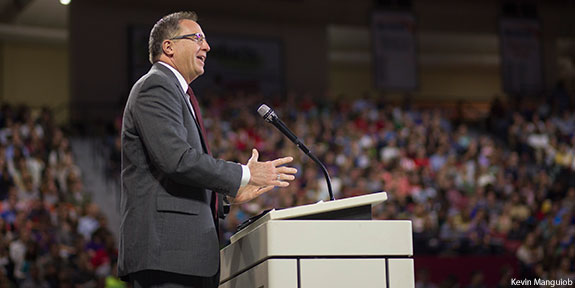 American Bible Society president Roy Peterson spoke at Wednesday's Convocation about the progress Bible translators are making in bringing the Word of God to the unreached population worldwide.

Key Christian leaders from across the country joined President Jerry Falwell onstage for Wednesday’s Convocation as Liberty University marked the final day of Global Focus Week. Throughout the week, the Center for Global Engagement has been raising awareness and mobilizing Liberty students, faculty, and staff to respond to the needs of international missions organizations.

American Bible Society president Roy Peterson delivered the keynote address at Convocation, unveiling startling new data on Bible translation indicating that within the next generation — for the first time in history — the number of unreached, unengaged people groups could reach zero.

“You’re watching skyrocketing movement of translation. It’s now becoming available on our digital devices so that we can access the Scriptures all over the world. It’s an unprecedented movement to be involved in the completion of the Great Commission, and I’m so glad that Liberty University is part of it.”

Peterson challenged students to finish the task of translating God’s Word into every language, highlighting the roughly one-third of known language groups with no Bible translation underway.

“Is there anybody here today who has a passion to go where Jesus has never been heard? Where His presence, His church, has not been planted? I hope there are some here today who are sensing the call of God to pray, or give, or go — be involved in a solution,” Peterson said.

Mart Green, founder and CEO of Mardel Christian and Educational Supply and heir to the Hobby Lobby family of companies, also appeared onstage, sharing his journey of learning to appreciate God’s Word.

Green told the story of a $20,000 Bible translation project he helped fund. Only after the project was completed did Green learn that only 400 native-language speakers would benefit from the translation. He described how his skepticism regarding the return-on-investment melted away when he witnessed a translator named Gaspar weeping over a Bible he had waited 40 years to receive. At that point, Green says, the Holy Spirit asked him, “Why don’t you ask Gaspar, ‘Is he worth it?’”

The next day, Green said, he made a vow to read the Bible first thing in the morning each day for the rest of his life — something he was not already doing as a church-going Christian.

“I’ve made two vows — one to my wife, ‘til death do us part’ — and the other to get up and read God’s Word. And it has radically changed my life.”

After Peterson’s and Green’s addresses, current Wycliffe president Bob Creson presented President Falwell with a painting titled “The Last Translator,” depicting the person who will translate the Bible into the last remaining language. For now, the translator is faceless and nameless, but the painting will be finished when the last Bible translation is finished — probably within the next 10-12 years.

“You’ve created an environment where learning comes together with these wonderful opportunities to share the good news of the Gospel,” Creson told Falwell.

Creson thanked the president for Liberty’s scholarship programs, the Center for Global Engagement’s loan forgiveness program, and the many Liberty alumni who have gone on to work for Wycliffe.

At the beginning of Convocation, Courtney Garrett, Liberty alumna and first runner-up in the 2015 Miss America competition, made a surprise appearance on the platform.

Convocation closed with a stirring performance from slam poet David Bowden, leaving students with a reminder of how God’s inspired words in Scripture breathe life into spiritually cold, dead hearts.