Flames Football to face No. 23 Tar Heels in season opener 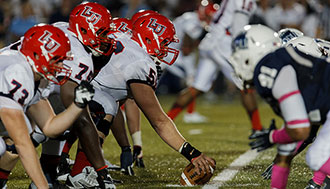 On Saturday, Liberty University’s football team will begin its 2014 campaign on the road against No. 23 North Carolina, the program’s first-ever game against a nationally ranked Football Bowl Subdivision (FBS) opponent.

This is the first football matchup between the two programs.

The trip to Chapel Hill, N.C., will be the third time in four seasons that the Flames have opened their season on the road against an ACC opponent. Defeating the Tar Heels would mark Liberty’s first victory over an ACC school or a ranked FBS team. The Flames have defeated two FBS opponents in program history — Eastern Michigan in 1989 (25-24) and Ball State in 2010 (27-23).

Liberty has won six Big South Conference titles in the last seven years, including the past two under head coach Turner Gill.