All 26 members of Liberty University’s NCAA Division I women’s swim team made the trek to the Bedford County family farm of President Jerry Falwell on Friday afternoon for a relaxing and refreshing swim in his lake in preparation for the rigors of interval practices.

With the Apple Orchard Mountain providing a scenic backdrop, Lady Flames’ 24 swimmers and two divers participated in their first team-building activity of the season — treading water and looking more like a synchronized swim team as they made an “LU” formation for an overhead photo shoot.

The Lady Flames formed tight bonds on the two-hour retreat from campus life, also getting in an open-water distance swim in a friendly team competition.

While divers Madi Long and Courtney Fox watched from the dock, the 24 swimmers completed a freestyle lap across the 300-yard lake and back in a competition to see who would be the first to be issued gear for the upcoming season, which starts Sept. 26 at Campbell University.

Hannah Wakeley, a distance swimmer from New Jersey who competed in open-water swims over the summer, was the first to make the turn on the grassy bank and land upon the beach shore near the Falwell’s dock.

“This is our first official water workout of the year and we thought it would be special,” Liberty head coach Jake Shellenberger said. “Open-water is not our thing. We are more of the pool type. But it’s exciting. This is unique. Not many swim teams open up their season by practicing in their president’s lake. We are blessed and thankful to be able to do it, to come out here and have some fun.”

There are 12 newcomers on this year’s women’s swim squad — 11 freshmen and one transfer — so the opportunities to forge friendships early on are important to the team concept.

“Right now, this is about culture and team building as much as it is working out,” Shellenberger said. “It’s the intangibles that you can’t really teach. We did a little team building and team bonding, and we swam.”

The Lady Flames will hold their second weight training session Saturday at 7:30 a.m. before shuttling back out to Bedford County for a hike to the 4,000-foot summit of Sharp Top in the Peaks of Otter. 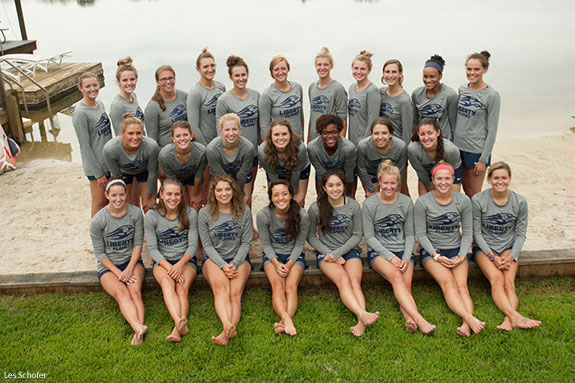