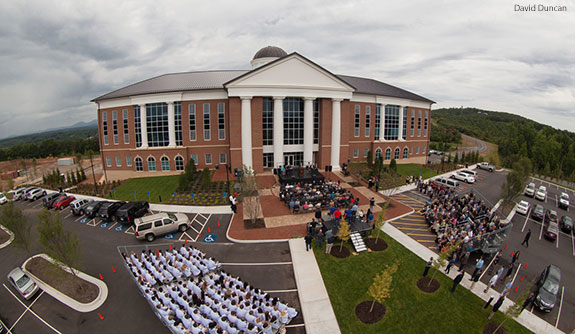 On Friday, Aug. 22, Liberty University unveiled its new Center for Medical and Health Sciences, hosting a ceremony in its courtyard attended by some of the area’s top influencers in government and public welfare.

The 162-member inaugural class of the Liberty University College of Osteopathic Medicine (LUCOM) joined Liberty staff, faculty, and community leaders in celebrating the new building and the launch of the new medical school. Classes began on Monday, Aug. 4.

The 144,000-square-foot, four-story facility is equipped with two auditoriums, 16 small group study classrooms, 12 conference rooms, and 15,000 square feet dedicated toward its anatomy, clinical medicine, and osteopathic manipulative medicine (OMM) laboratories. Each lab is built to accommodate live, broadcast-ready video feeds and 3-D video content for students to interact with on the floor.

“I look forward to the day that my own medical care will come from doctors trained right here,” President Jerry Falwell told the crowd. He then joked, “I am 52, so I am hopeful that my health will remain solid until you students have some experience under your belts.”

Ronnie B. Martin, D.O., FACOFP-dist, dean of LUCOM, challenged those in attendance by reminding them that the students and faculty, not the building, will give the building its true value.

“This magnificent structure behind me, alone, will not improve public health, expand access to healthcare, or promote wellness,” Martin warned. “Its strength and its stability will not be measured by the tensile strength of concrete and steel, but rather by the commitment of the hearts, the minds, and the hands of those here today and those that will follow.”

President Falwell also attested to the dean’s high emphasis on teaching medical students to display Christ-embodying character, saying, “In the short time that I have known Dr. Martin, I have watched him practice what he preached.”

Sharing the stage with Dr. Martin and President Falwell was the president’s sister, Jeannie F. Rivers, M.D., who was the first female Liberty graduate to attend medical school. She earned a degree from Virginia Commonwealth University School of Medicine and is now Chief of Surgery at Hunter Holmes VA Medical Center, making her one of only a handful of women in the nation to hold the position. In her address, Dr. Rivers shared her father’s own commitment to family-work balance, encouraging students to achieve the same and to always view medicine as a ministry.

“Strive to be the best that you can as you go forth, and most importantly, keep God first in your lives and in your practice, and your families first.”

Liberty University broke ground on the Center in November 2012, with President Falwell calling it “the last piece of the puzzle” in his father’s original vision for a world-class Christian university.

Arif Haseez, an EMT from New York and a LUCOM student doctor, felt honored to be a part of this milestone.

“The building is beautiful. We have state-of-the art equipment to teach us, and I feel really blessed to be here and to be using all of this,” said Haseez.

Nichole Pinkleton, an alumna of Liberty now enrolled in the D.O. program, was also excited about the new facility.

“There are so many great features. The technology is tremendous,” she said. “I really can’t speak highly enough about the facilities, the faculty, and staff.”

Funded by a $20.5 million grant from the Virginia Tobacco Indemnification and Community Revitalization Commission, the building represents “the largest single financial commitment” made by the Tobacco Commission, said Del. Kathy Byron. The purpose, she said, is to meet the critical need for healthcare in the underserved, rural areas of Virginia.

“The Commission participated in this project because the respective visions of the college and the Commission are so closely aligned. The College of Osteopathic Medicine presented the rare opportunity to fulfill the needs of our region,” Byron said. She also noted that as LUCOM continues to serve the community into 2018, when the first class will graduate, “more than $45 million of annual, direct economic impact on the region is predicted.”

Byron marveled that the “missionary spirit” of Liberty’s medical students was further proof of God’s blessing.

“It’s amazing to believe what Liberty University can do in such a short period of time.”

President Falwell also expressed his appreciation to the Tobacco Commission, honoring Byron and Del. Terry Kilgore, chairman, for their efforts to support community-based medical access where it is most needed in southside Virginia.

“Without the $20-plus million in grants that the VTC provided to this endeavor, we would not have ventured out so boldly and so soon,” Falwell said. “This great school would have been delayed for many years and might not have become a reality at all without your help.”

LUCOM is the second medical school in the state and the 30th in the nation to offer the Doctor of Osteopathic Medicine degree.