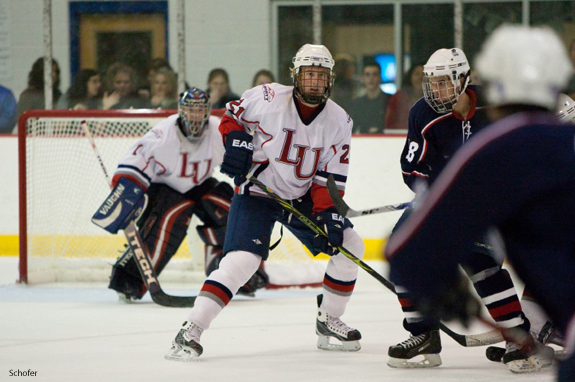 The Liberty University men’s hockey team moved to the No. 3 spot in the latest Division 1 American Collegiate Hockey Association (ACHA) rankings. Liberty is tied at No. 3 with Ohio.

Undefeated Liberty (10-0-0) moved up four spots from the last ranking. Defending National Champions Lindenwood University (10-0-0) received 43 of 44 first-place votes to top the polls, while Liberty received the other first-place vote. Holding steady in the No. 2 spot is Illinois.

The 2010 ACHA Men's Division 1 National Championships will be hosted by Robert Morris University Illinois and will take place March 6-10, 2010 at The Edge in Bensenville, Ill. Sixteen teams will qualify for the tournament.

Liberty hosts Towson University Oct. 23 and 24. For a complete schedule and ticket information, go to www.liberty.edu/hockey.